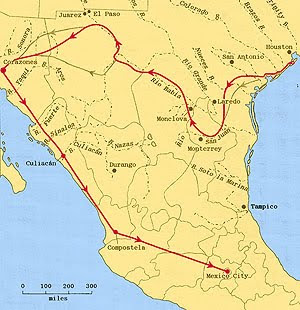 That's the subtitle of A Land So Strange, by Andres Resendez. The other subtitle summarizes the story: "The Extraordinary Tale of a Shipwrecked Spaniard Who Walked Across America in the Sixteenth Century." In 1528 about 300 Spaniards trying to reach Mexico were stranded on the western side of Florida near Tampa Bay. They travelled by foot and horse to the Panhandle area, eventually eating their horses to fend off starvation. They fashioned rafts and tried to sail westward along the Gulf, only to be ravished by storms, finally reaching the barrier islands near present-day Galveston. Further starvation winnowed the survivors down to three Spaniards and an African from Morocco. They proceeded naked and barefoot across south Texas and the Sierra Madre mountains of Mexico, surviving by eating cactus, spiders, and "deer excrement." Eight years after leaving Florida they made contact with the Spaniards in the Mexico City area.

Cabeza de Vaca was a well-educated man who later wrote an account of his journey. Resendez has compiled that information along with other historic and archaeologic investigations into this book, which is an easy and well-illustrated read.