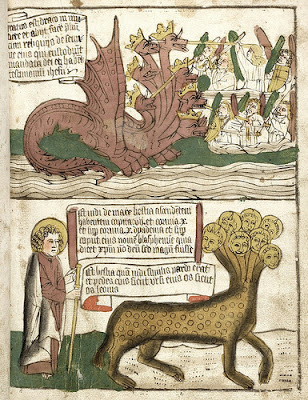 Many thanks to Scribal Terror for their brief entry this morning about a fifteenth-century illustrated Apocalypse, which included a description of a blockbook:

Blockbooks of mid-fifteenth century Europe were often printed, not with a press, but by laying the sheet of paper over the inked block and rubbing the back of the paper with some rounded object (a "rubber" or "burnisher") to transfer the ink. (The technique will be familiar to many people who have done some introductory experiments in printing, perhaps in school art classes.) When you print this way, you can only print on one side of the sheet, since the rubbing of the "verso" would damage the printing on the "recto".... The blockbook technology was not, as you might imagine, an early stage of printing from which printing with moveable type evolved. In fact, the age of the blockbook in Europe was contemporary with the first two or three decades of printing from moveable type; most blockbooks are dated in the 1450's, 60's or 70's.

More details at the blockbook link above. And more images at the fascinating blog entitled BibliOdyssey, which I hope to explore and provide more links to in the future.