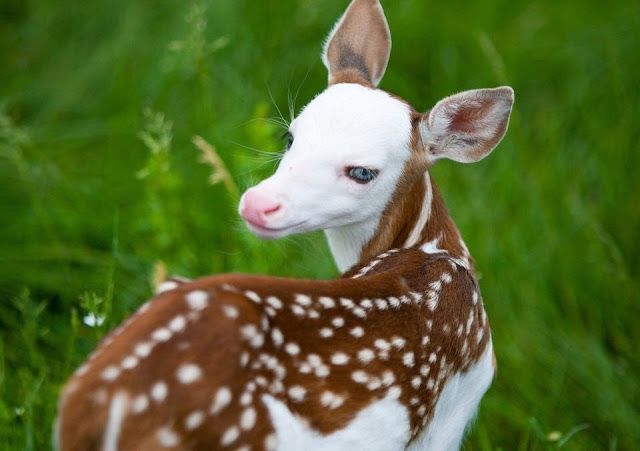 Posted for the photo (via), but then I had to look up about piebaldness:


A piebald or pied animal is one that has a pattern of unpigmented spots (white) on a pigmented background of hair, feathers or scales. Thus a piebald black and white dog is a black dog with white spots. The animal's skin under the white background is not pigmented.

Location of the unpigmented spots is dependent on the migration of melanoblasts (primordial pigment cells) from the neural crest to paired bilateral locations in the skin of the early embryo.

Animals with this pattern may include birds, cats, cattle, dogs, foxes, horses, pigs, and snakes. Some animals also exhibit colouration of the irises of the eye that match the surrounding skin (blue eyes for pink skin, brown for dark). The underlying genetic cause is related to a condition known as leucism. 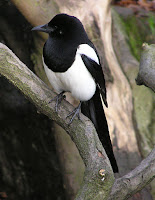 In medieval English "pied" indicated alternating contrasting colours making up the quarters of an item of costume or livery device in heraldry. Court jesters and minstrels are sometimes depicted in pied costume and this is the origin of the name of the Pied Piper of Hamelin.

The word "piebald" originates from a combination of "pie," from "magpie", and "bald", meaning "white patch" or spot. The reference is to the distinctive black-and-white plumage of the magpie.

And I sure didn't know this:


The bald eagle derives its name from the word "piebald" in reference to the contrast of its white head and tail with dark body.