Bowling going down the gutter 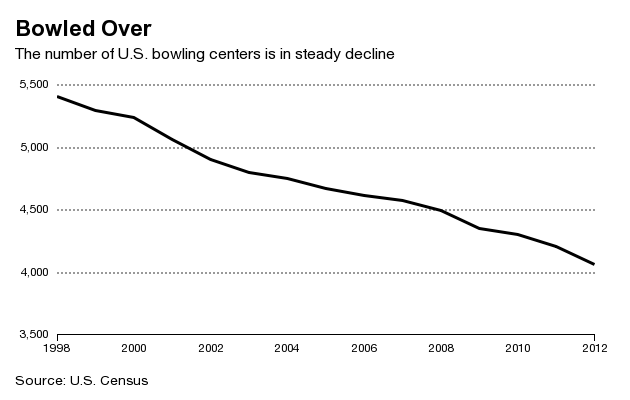 An article at Bloomberg Business Week makes note of the downward trend in the popularity of bowling:


The U.S. had 4,061 bowling centers in 2012, down 25 percent from 1998, the earliest year for which the U.S. Census collected consistent data. But the decline of the bowling alley probably started a lot earlier. The U.S. added 2,000 bowling alleys between the end of World War II and 1958, when the American Society of Planning Officials reported that “the bowling alley is fast becoming one of the most important—if not the most important—local center of participant sport and recreation.”..

In those days, bowling was a social imperative for many Americans, says Marcel Fournier, who owned a string of bowling centers in western New York State starting in the 1960s. “The bowling alley was the blue-collar country club,” he says, and most of his business came from people competing in weekly leagues. As the workforce changed and access to other recreational activities expanded, interest in bowling leagues waned.

I've posted before about the similarly waning populatiry of golf.  And stamp collecting.   *Sigh*