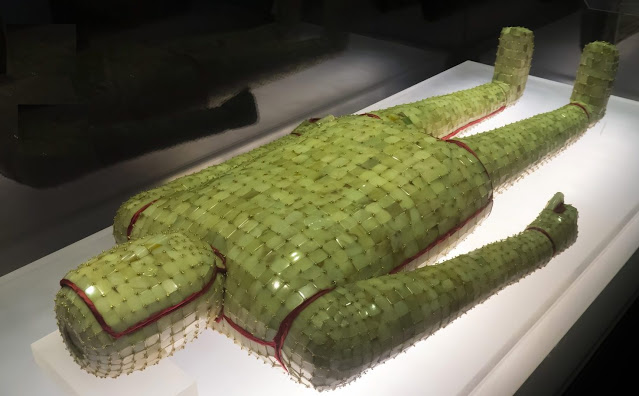 As reported at Heritage Daily:

Because of its hardness, durability, and subtle translucent colours, jade became associated with Chinese conceptions of the soul, protective qualities, and immortality in the ‘essence’ of stone (yu zhi, shi zhi jing ye)...
The Han thought that each person had a two-part soul: the spirit-soul (hun 魂) which journeyed to the afterlife paradise of immortals (xian), and the body-soul (po 魄) which remained in its grave or tomb on earth and was only reunited with the spirit-soul through a ritual ceremony. The early Han rulers came to believe that jade would preserve the physical body and the souls attached to it in death, with various burials being found with large and small jade bi discs placed around the deceased.
This developed into the practice of being buried in ornate jade burial suits, completely encasing the deceased in thousands of pieces of cut and polished jade sewn together with thread, believing that the suit ensured the body would remain immortal. It is estimated that it would require hundreds of craftsmen more than 10 years to polish the jade plates required for a single suit, emphasising the power and wealth of the deceased...
According to the Hòu Hànshū (Book of the Later Han), the type of thread used was dependent on status. An emperor’s jade suit was threaded with gold, whilst lessor royals and high-ranked nobility with silver, sons and daughters of the lessor with copper, and lowly ranked aristocrats with silk.
It is believed that the practice ceased during the reign of the first emperor of the state of Wei in the Three Kingdoms period (AD 220-280), in fear of tomb robbers who would burn the suits in order to retrieve the gold or silver thread.

So far, 20 of these suits have been found.  More pix at the link.