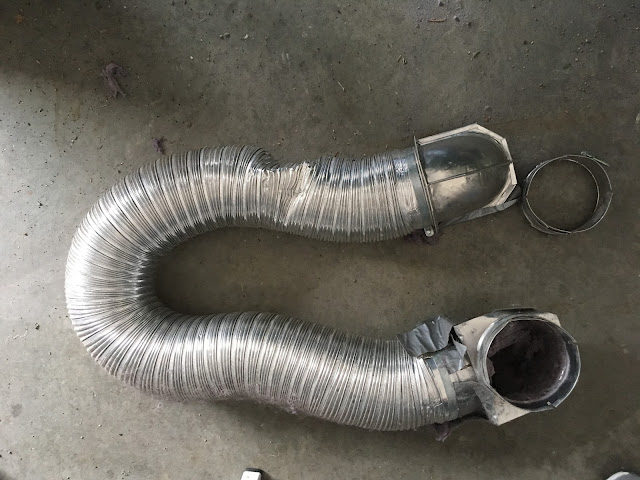 It's not sufficient to clean the lint trap screen on your appliance.  We did that for 15 years, but still found the efficiency of the dryer decreasing, so we called in the services of a professional.  The first thing he did was remove the contorted connector (above) that ran between the dryer and the wall conduit.  The previous owner of the house had done this because the dryer vent outlet and the wall site were not in line horizontally or vertically.   This segment was not occluded with lint, but it's inefficient and prone to collecting debris.

The replacement (not shown) is a short "transition vent" that runs diagonally; it will need to be detached in order to move the dryer out to clean the floor etc, but it's less likely to become plugged with lint. 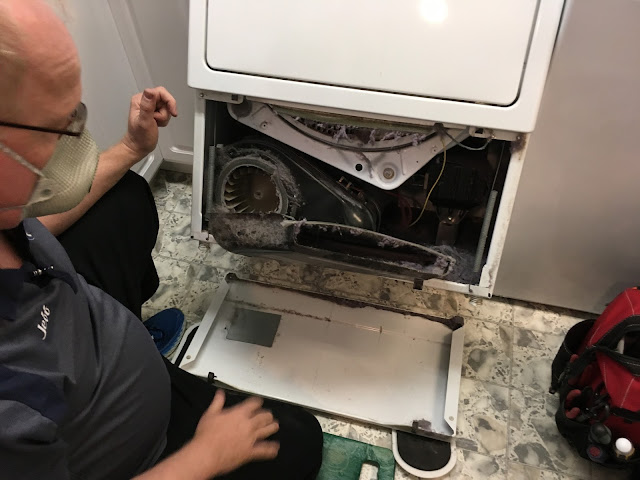 The next step was to clean inside the dryer by removing the front panel. 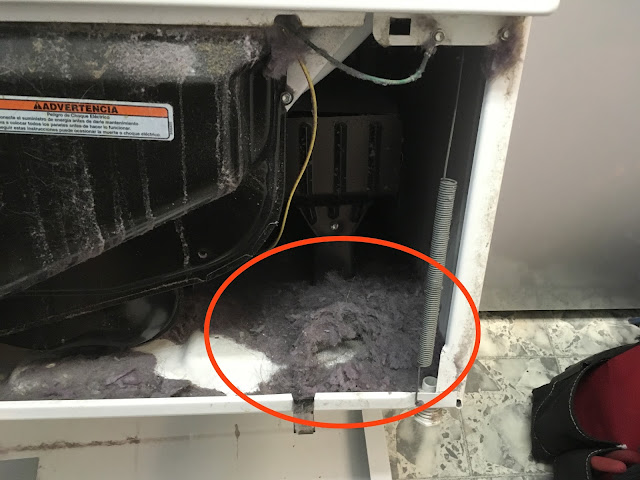 I've highlighted with a red oval the problem he usually finds - an accumulation of dust and (in our case) cat hair.   When home clothes dryers catch fire, THIS is the where the combustible material is typically located.  And most importantly, this material is NOT derived from the clothes in the dryer - it gets sucked into the cabinet from the floor of the room.

Think about it.  The dryer is going to heat and spin and blow air out its vent.  To do that, it has to pull air in from somewhere.  Not from outdoors, where the air might be subzero, but from behind itself and from the floor of the room.  Even if you're careful about cleaning, over the years dust and debris will accumulate. 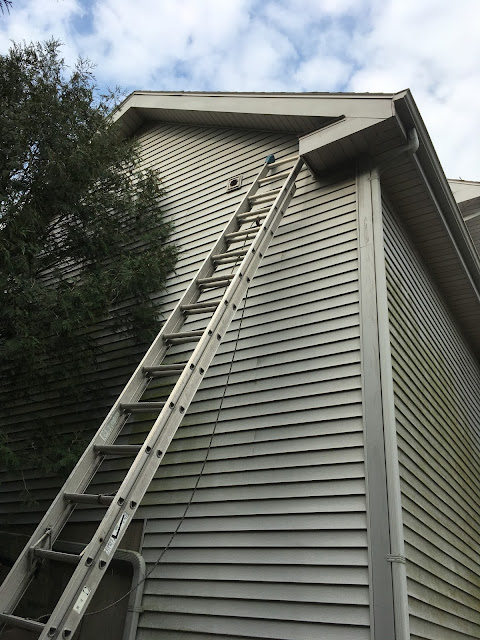 Too high for me to access.  I don't have a ladder that long, and if I did, I wouldn't go up except at gunpoint.  He went up and removed the louvers that covered the vent.  The louvers were twisted and didn't move freely.  This happens because the exiting air is hot enough to warp the plastic slats of the louver (this risk is present on clothes-dryer vents, but not on ones for room-temp air such as bathroom vents).  He reached in and dropped down to me a handful of what he found inside: 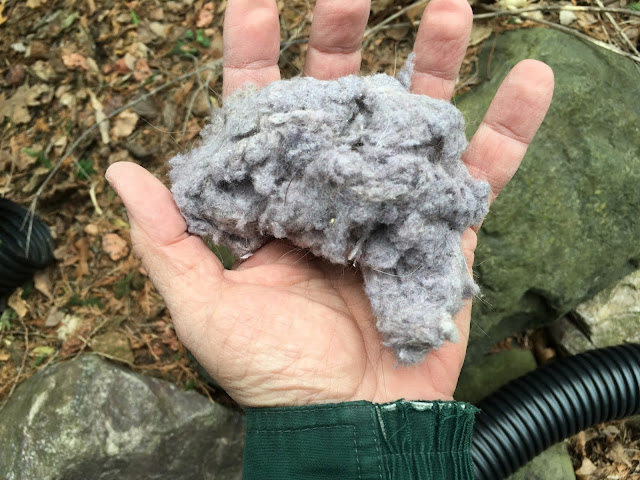 That's typical clothes lint - the stuff that works its way through the trap in the dryer.

The next step was to clean the entire conduit - probably 30-40 feet in length.  On the internet I had read reports of homeowners claiming success in cleaning such vents by adapting the output of a leaf blower to the indoor end and blowing the ducts out.  He explained that it's seldom that simple.  The lint that exits sometimes carries some moisture and especially at bends or joins in the tubing it can accumulate in a consistency not unlike papier-mâché.

What professionals use (I didn't take a photo) is the air-duct equivalent of a Roto-Rooter for water drains.   It's a flexible "snake" with brushes that rotate as it traverses the ducts.  And as it goes through, vacuum is applied from the inside to suck out the material that is coating the duct. 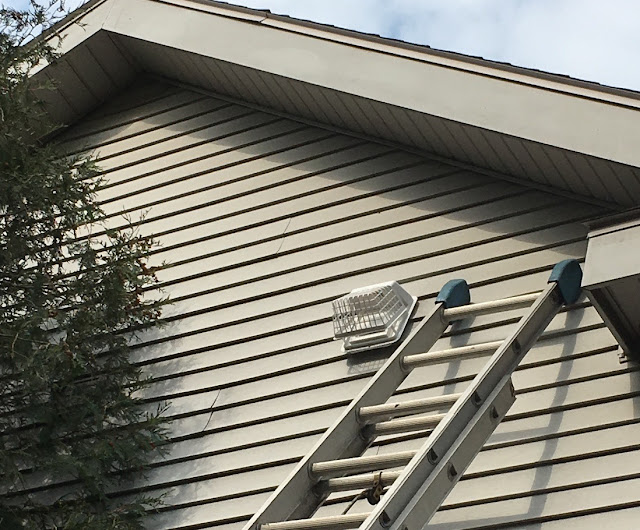 Finally, he replaced the louver with an animal-exclusion cage (it lifts up for cleaning if lint accumulates).  Our exit site did not contain a bird's nest or any evidence of animal invasion.  Birds do sometimes nest in these sites if they are open (he had recently serviced the vents at an apartment complex where a dozen of the 30-40 vents had bird nests in them).  Chipmunks and other small rodents will nest in these locations if the outlet is low on the wall.  Bats are not a problem because they do not tolerate the heat.

We couldn't be happier with the result.  The first load we ran dried in probably half the time that similar loads required in the past, so there will be a saving in electricity plus much less wear and tear on tumbling clothes, plus eliminating one potential risk for a house fire.

Finally, a shout-out to the crew: 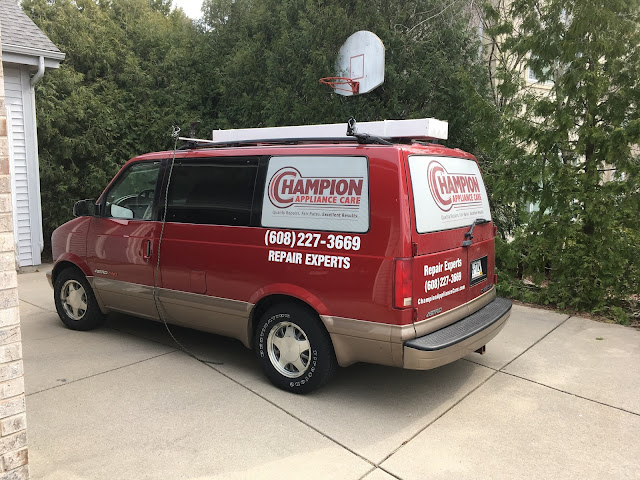 They were highly efficient and totally professional.  Their offices are on Odana Road in Madison, Wisconsin.

Reposted from 2017 to add this incredible GIF ("Renters demand a new dryer since this one "isn't working well"").

Addendum:  Here's another one - even more impressive. ("My friend asked me to switch her laundry over. I found out they didn’t know you were supposed to clean your lint trap.")
Addendum:  A relevant video -