Word for the day: phasmids 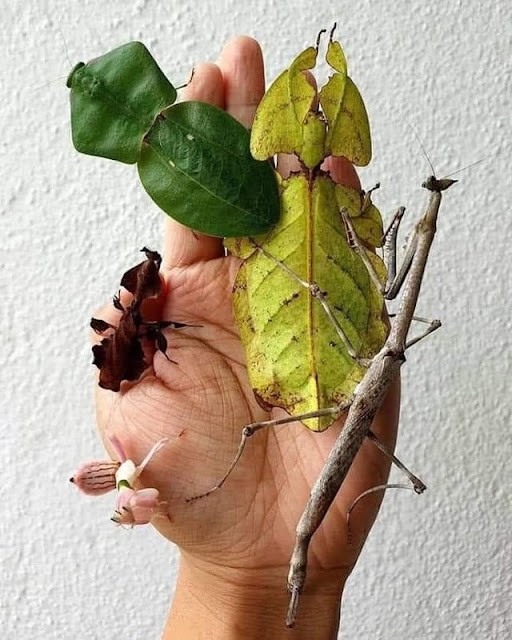 The photo shows a variety of plant-mimic insects, apparently both mantids and at least one phasmid.  I had to look up the latter term:

The Phasmatodea (also known as Phasmida, Phasmatoptera or Spectra) are an order of insects whose members are variously known as stick insects, stick-bugs, walking sticks, or bug sticks. They are generally referred to as phasmatodeans, phasmids, or ghost insects. Phasmids in the family Phylliidae are called leaf insects, leaf-bugs, walking leaves, or bug leaves. The group's name is derived from the Ancient Greek φάσμα phasma, meaning an apparition or phantom, referring to their resemblance to vegetation while in fact being animals.

I have always been delighted to encounter stick insects, and a few years ago managed to get a nice photo of one who climbed onto my jeans while I was hiking in the Minnesota north woods: 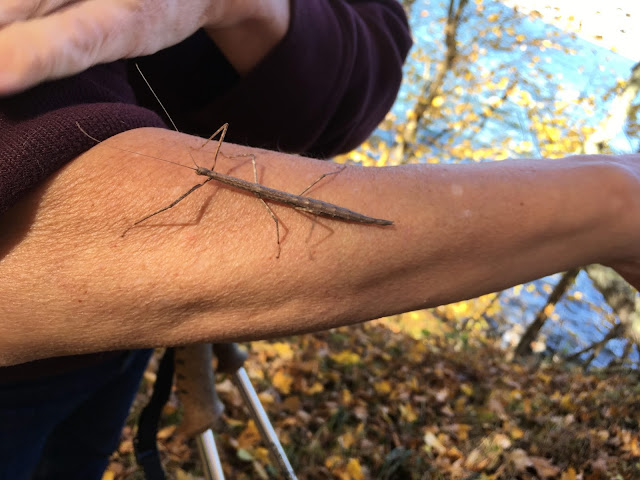 So I was surprised to learn that they can be pests:

Phasmatodea are recognized as injurious to forest and shade trees by defoliation... Indeed, in the American South, as well as in Michigan and Wisconsin, the walking stick is a significant problem in parks and recreation sites, where it consumes the foliage of oaks and other hardwoods... The insects eat the entire leaf blade. In the event of heavy outbreaks, entire stands of trees can be completely denuded. Continuous defoliation over several years often results in the death of the tree. Because these species cannot fly, infestations are typically contained to a radius of a few hundred yards. Nevertheless, the damage incurred to parks in the region is often costly. Control efforts in the case of infestations have typically involved chemical pesticides; ground fires are effective at killing eggs but have obvious disadvantages. In New South Wales, research has investigated the feasibility of controlling stick insects using natural enemies such as parasitic wasps (Myrmecomimesis spp.).