You learn something every day.  I knew that the ginko is a most unusual tree - often described as a "living fossil" little unchanged from the Permian era.  I certainly didn't know that it produces motile sperm.  Here are some excerpts from an interesting article in Harvard Magazine:


[In 1896] in Tokyo, Japanese botanist Sakugoro Hirase peered through his microscope at the inside of a female ginkgo tree’s ovule. The previous spring, a male ginkgo’s pollen had wafted on the wind toward a female ginkgo with many dangling pairs of round ovules. On the tip of an ovule, a secreted drop of gooey fluid captured and absorbed the pollen into an interior pollen chamber. The pollen had grown all through the summer and, as Hirase was astounded to observe, it had become a multiflagellated ginkgo sperm (three times larger than human sperm) that was swimming to fertilize a waiting egg cell.

“This was really momentous,” according to Del Tredici. “The discovery of motile sperm captured people’s attention. From the scientific point of view, motile sperm was considered to be a trait associated with evolutionarily primitive, non-seed plants such as mosses and ferns. And yet here was the ginkgo tree—clearly a seed-producing plant—with its motile sperm that linked non-seed plants to the more evolutionarily advanced conifers and angiosperms with pollen tubes and non-motile sperm..."

It takes about 133 days for the ginkgo pollen to develop into sperm that then flails its way to the egg and creates a growing embryo. Soon thereafter, in the fall, the fleshy seeds, containing a hard-shelled nut with a tiny embryo, drop to the ground... And then there was the mystery of the stinky fruits. On that trip to China, he learned that local nocturnal scavengers and carnivores like Chinese leopard cats and the masked palm civet ate the ginkgo’s fruit. He hypothesized that the stinky flesh mimicked the smell of rotting meat, a successful strategy to attract these creatures. The ginkgo nuts, in turn, were eventually excreted...


The 2008 and 2009 studies, Del Tredici said, "showed no significant effect by ginkgo-leaf extract in patients suffering from dementia or memory problems.

(Reposted from 2011 for Arbor Day 2015)  Reposted again to add this photo of an impressive ginko tree: 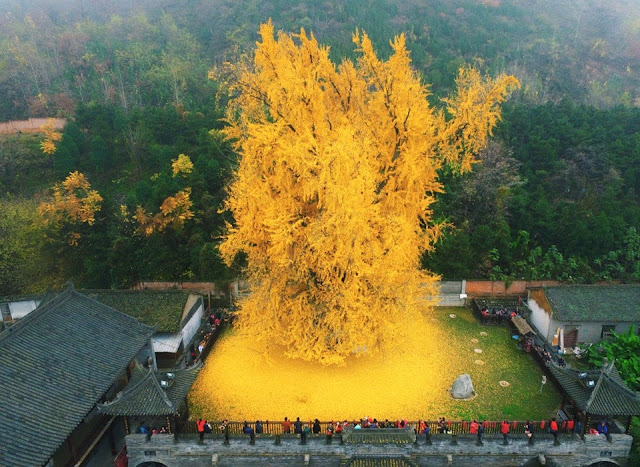