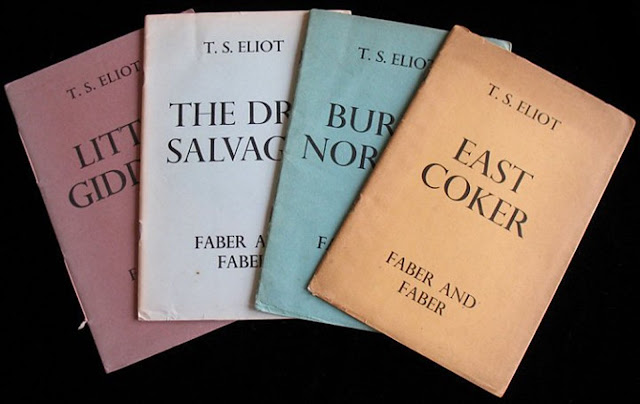 I recently found on my bookshelf a half-century-old copy of T. S. Eliot's Four Quartets.  I must have purchased it during or shortly after my years as a collegiate English major.  I had read it, deemed it a "keeper," placed it on a bookshelf, and then it had accompanied me through various moves to new cities and careers.

As I looked at the cover, I realized there was only one passage that I could remember from the entire book:


"We shall not cease from exploration
And the end of all our exploring
Will be to arrive where we started
And know the place for the first time."
(Little Gidding)

I decided it was time to give the book a "goodbye read" and donate it to the library.  Almost immediately (at the start of Burnt Norton) I found another memorable passage:


"Time present and time past
Are both perhaps present in time future,
And time future contained in time past,
If all time is eternally present
All time is unredeemable."

But what did it mean?  It's lyrical and clever - but I can't grasp the concept.

I kept reading, finding some interesting turns of phrase in Burnt Norton -

- and in East Coker:


"... There is, it seems to us,
At best, only a limited value
In the knowledge derived from experience.
The knowledge imposes a pattern, and falsifies,
For the pattern is new in every moment..."

In this short work there was an abundance of unfamiliar and undoubtedly interesting words: suspire, behovely, sempiternal, chthonic, sortilege, scry, haruspicate, ineffable, appetency, tumid, periphrastic, hebetude, grimpen.  I'll need to look those up later (grimpen has an obvious connection to a certain Sherlockian mire).

By the time I finished the book, I realized Four Quartets is no longer "accessible" to me.  I can't consider myself successful to finish a book and wind up with just a handful of harvested quotes and interesting words if I don't also have a sense of what in the world I just finished reading.  This book took Eliot years to write and was meticulously crafted to encompass some of his deepest thoughts about religion and the "meaning of life."  But I can't for the life of me extract any of that for my own use.

It's not that I dislike T. S. Eliot.  I love Prufrock (see Spooning - and Prufrock - updated and Prufrock in cartoon format), and I fully intend to give The Waste Land (April is the cruellest month... Hurry up, please, its time...) a goodbye read.  But I expect it will be more of a dutiful read rather than an eager one.

And if T. S. Eliot is now beyond my ken, do I have the energy to read through The Canterbury Tales again?  Or Lord Byron's Don Juan, or Milton's Paradise Lost?  I consumed them eagerly as an undergraduate, secure in the knowledge that I was reading classic, perhaps immortal, literature and sharing an experience with dozens of generations of other readers worldwide.  If I had any hopes back then that I would be sitting with friends in my retirement to argue whether Byron's incestuous relationship with his half-sister Augusta Leigh influenced his writing of Don Juan, or to what extent Milton's blindness is reflected in his works, those hopes have long since faded.  Nowadays when I reach for something to read, my hand will bring down from the shelf something less challenging.

Image cropped for size from the original at Genius.