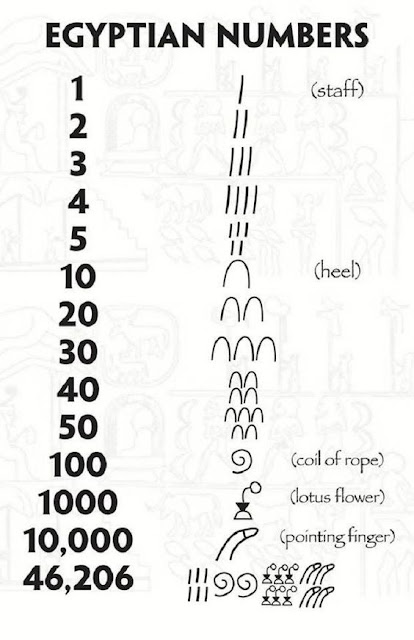 At the via it was noted that the numbering system is non-positional, so the symbols can be arranged in any order.

Also cited there, and tangentially related, was this rather sad statistic:


A survey by Civic Science, an American market research company, asked 3,624 respondents: “Should schools in America teach Arabic numerals as part of their curriculum?” The poll did not explain what the term “Arabic numerals” meant.

Some 2,020 people answered “no”. Twenty-nine per cent of respondents said the numerals should be taught in US schools, and 15 per cent had no opinion.

John Dick, chief executive of Civic Science, said the results were “the saddest and funniest testament to American bigotry we’ve ever seen in our data”.

Seventy-two per cent of Republican-supporting respondents said Arabic numerals should not be on the curriculum, compared with 40 per cent of Democrats. This was despite there being no significant difference in education between the two groups.

“They answer differently even though they had equal knowledge of our numerical nomenclature,” Mr Dick said. “It means that the question is about knowledge or ignorance but [also] something else – prejudice.”

This bias was not limited to conservative respondents and attitudes towards Islam.
Another poll question was worded: “Should schools in America teach the creation theory of Catholic priest George Lemaitre as part of their science curriculum?”

Seventy-three per cent of Democrats answered “no”, compared to 33 per cent of Republicans – with some respondents on either side presumably assuming Lemaitre’s theory was related to intelligent design.

In fact, the Belgian priest was also a physicist who first discovered the universe was expanding and proposed its origins lay in the explosion of a single particle - an idea that became known as the Big Bang theory.

“While Lemaitre is more obscure than Arabic numerals, the resulting effect is almost identical,” Mr Dick said. “Dems are biased against Western religion, if latently."