Language used by Wilkie Collins in "The Moonstone"

A classic and well-written book, considered by many to be the original detective novel.  Dorothy Sayers considered it "very probably the finest detective story ever written."


One of the features that made The Moonstone a success was the sensationalist depiction of opium addiction. Unbeknownst to his readers, Collins was writing from personal experience. In his later years Collins grew severely addicted to laudanum and as a result suffered from paranoid delusions, the most notable being his conviction that he was constantly accompanied by a doppelganger whom he dubbed "Ghost Wilkie".

Herewith some interesting words and phrases I encountered while reading the book. 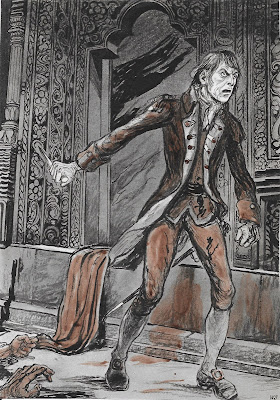 "In society he was constantly making mistakes, and setting people unintentionally by the ears together."
I couldn't find a good explanation of this one.  Idioms are hard as heck to look up.

"... plying her confidentially with a glass of hock."  A Rhenish wine, the name coming from the town of Hochheim am Main.

"The other women took to their Bibles and hymn-books and looked as sour as verjuice over their reading..."

"This was the first attack of the megrims that I remembered in my mistress..."  Depression, unhappiness, moodiness.  Interestingly, derived from Middle French migraigne, in turn from Latin hemicrania referring to migraine.

"... and making a sudden snatch at the heap of silver, put it back, holus-bolus, in her pocket."  Said to be "pseudo-Latin" meaning the "whole" bolus, the latter directly from the Latin for a big lump.

"Bating her lame foot and her leanness... the girl had some pleasing qualities..."  "Apart from", related to bate/abate to reduce the force of.

"She was always in the habit of feeding the bird herself.  Some groundsel was strewed on a table which stood immediately under the cage."  A plant related to ragwort and asters.

"I cast the miserable trammels of worldly discretion to the winds, and spoke with the fervor that filled me..."  Something that impedes activity, from the French tramail for a type of fishnet.  We're more familiar with the converse "untrammeled." 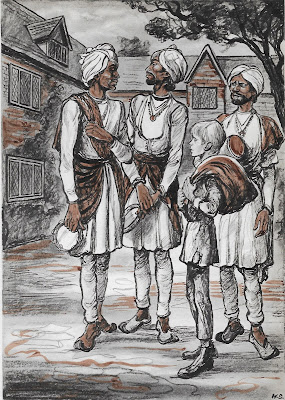 "I looked at the once lively, rattle-pated, humorous little doctor..."  Apparently using pate to mean head, rattle would imply empty-headed.

"His gypsy complexion, his fleshless cheeks, his gaunt facial bones, his dreamy eyes, his extraordinary party-colored hair..."  [I believe elsewhere in the book his hair was referred to as particolored]  Meaning multicolored - probably the parti indicating different parts in different colors.

"I could have taken my oath that I saw Mr. Luker pass something to an elderly gentleman in a light-colored paletot."  French word for loose outer jacket.

"Light this halt of the pilgrims by the wild red flames of cressets and torches..."  Again French, referring to a lamp with burning pitch suspended from a pole.

And finally two good turn of phrases [or should that be turns of phrase?]:


"There's a bottom of good sense, Mr. Franklin, in our conduct to our mothers, when they first start us on the journey of life.  We are all of us more or less unwilling to be brought into the world.  And we are all of us right."

"What a case!" I heard him say to himself, stopping at the window in his walk, and drumming on the glass with his fingers.  "It not only defies explanation, it's even beyond conjecture!"