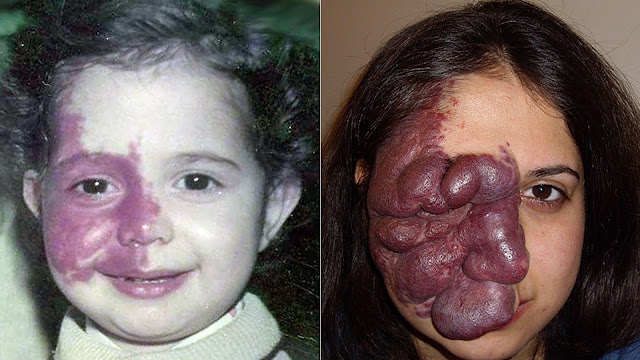 Sturge–Weber syndrome, sometimes referred to as encephalotrigeminal angiomatosis, is a rare congenital neurological and skin disorder. It is one of the phakomatoses and is often associated with port-wine stains of the face, glaucoma, seizures, intellectual disability, and ipsilateral leptomeningeal angioma (cerebral malformations and tumors)... Sturge–Weber syndrome is usually manifested at birth by a port-wine stain on the forehead and upper eyelid of one side of the face, or the whole face. The birthmark can vary in color from light pink to deep purple and is caused by an overabundance of capillaries around the ophthalmic branch of the trigeminal nerve, just under the surface of the face.

I have a port-wine mark (but not the Sturge-Weber syndrome), so I was interested in a Fox News report about the young woman pictured above, who finally received life-changing corrective surgery.


Ellahe Heghani, who came to the U.S. in 2009 to begin her treatment, has undergone more than 20 surgeries to treat Sturge-Weber Syndrome (SWS), which caused a red, purple-colored mark to take over her face, and robbed her of vision in her right eye,.. 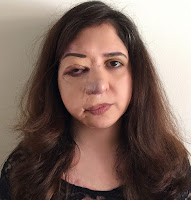 ... Waner saw her case different, and he removed the extra tissue from her face and began laser treatment to lighten the birthmark. Haghani then had skin grafts on her cheeks and nose and tissue expanders placed in her neck.

She told the news outlet that it wasn’t until she began to see the improvements from Waner’s treatment that she realized how much her birthmark affected her. “Horrible people told me I shouldn’t come out in public and stay inside, but I didn’t listen to them because it’s my life,”...

Heghani said her birthmark is still visible on her nose and forehead, but that she has regained her confidence and chose to go to nursing school to help others.

A sequence of photos is included in the source article at Caters News.

Readers who have vascular birthmarks (or family members with such) might want to visit the website of the Vascular Birthmarks Foundation.