Selections from "The Aztec Treasure House" 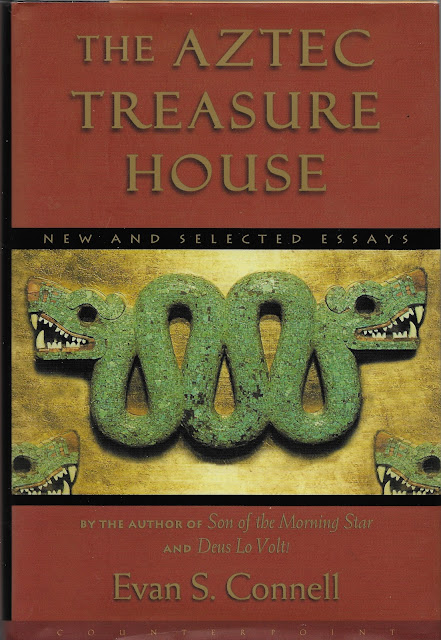 I've just finished re-reading The Aztec Treasure House, one of the most interesting books I've encountered in a long time, replete with an abundance of "things you wouldn't know."

The author is Evan S. Connell, who in 2009 was nominated for a Man Booker International prize for lifetime achievement.  This book is a collection of 20 essays on an enormous variety of topics from history and science - Antarctica, El Dorado, Atlantis, the Northwest Passage, the Children's Crusade, Prester John, the Olmec, and many more.


There are several Etruscan words that have survived in modern English: tavern, cistern, letter, person, ceremony, lantern ("but except for these, only about 100 Etruscan words have been deciphered")

New word: "Chests found by archaeologists at Herjolfsnes are made of pine, deal, and larch." According to Wiktionary, deal is "wood that is easy to saw (from conifers such as pine or fir.)"

Sir Douglas Mawson's solitary ordeal in Antarctica: "He had not taken off his socks for quite some time... The thickened skin of the soles had become entirely detached, forming a separate layer... He smeared his raw feet with lanolin, tied the soles in place with bandages, put on six pairs of thick wool socks, fur boots, and finally his crampon overshoes... He walked for a while on the outside of his feet, then on the inside, and when he could not endure the pain either way he went down on all fours and crawled - towing his sledge... Presently he got caught in a blizzard... The next special disappointment occurred the following day when he slipped into a crevasse..." (p. 104-8)

"Harappa and Mohenjo [archaeology sites in Pakistan] are twins, so much alike that archaeologists believed they could have been built by the same ruler... they were planned as deliberately as Brasilia or Salt Lake City and are just as predictable.  Everything was arranged.  The mechanical, conservative, windowless, unchanging architecture - block after block after block - implies a totalitarian attitude... 2,500 years before Christ... came these unimaginative, dark, flat-nosed builders who knew exactly what a city should look like.  And they lived in their geometrical barracks for ten centuries without changing a thing.  The style of building never changed.  The language did not change.  The first carved amulets are the same as the last."  (p. 144)

Giordano Bruno, at the beginning of the 17th century: "We know that he did speak his mind.  He spoke defiantly, imaginatively: "In space there are countless constellations, suns, and planets.  We see only the suns because they give light; the planets remain invisible, for they are small and dark.  There are also numberless earths circling around their suns, no worse and no less inhabited than this globe of ours..."" (p. 172)

Some early astronomers recorded their discoveries as anagrams:


"And in December of that year, 1610, Galileo perceived that Venus underwent phases - from sickle to full disc - which was proof that it revolved around the sun.  He made no public announcement of this; instead he contrived a baffling anagram:

His purpose was to establish himself as the discoverer, but at the same time conceal what he had learned so that nobody else might profit by it.  He filed this anagram with Giuliano de Medici, whom he trusted and who would be a powerful witness on his behalf. Properly arranged the letters read:

Cynthis being the moon - a generally understood poetic metaphor - whose figures or shapes were emulated by Venus, Mother of Love.

A cryptographer might deduce that the letters should be organized as follows: "Annulo cingitur, renui plano, nusquam cohaerente, ad eclipticam inclinato."  In other words, obviously, Saturn is encircled by a flat ring inclined to the ecliptic and nowhere touching the planet." (p. 191-2)


Albert Einstein was once asked what governed his taste in clothes.  He replied "Indifference."

"Neutrinos dance through lead walls the way mosquitoes dance through a chicken wire fence... the yellow star Arcturus is about forty light-years away... Now listen. A lead wall forty light years thick would almost stop a neutrino.  Not quite, but almost."  (p. 212)

"The core of these [pulsars] is magically small.  Some are thought to be no more than a mile in diameter... As for weight, a chunk the size of a matchbox, if you put it down gently, would break through he crust of the earth and keep right on falling toward the center... Expressed another way, a rock the size of a sugar cube would weigh more than a fleet of battleships." (p. 213)

"Astrophysicists seem perplexed by the information they have been gathering from quasars because some of these objects emit 100 times more energy than the largest galaxies in the universe.  In other words, to generate that amount of energy a quasar must annihilate a mass equivalent to one billion suns every second." (p. 216)

"Animals birds, and butterflies are said to have joined the French crusade.  Butterflies, bearers of the soul, were especially significant.  Much later Jeanne d'Arc would be asked during her examination: "Is it true that you and your banner go into battle among a cloud of butterflies?" (p. 273)

"He had watched the Tartars building and coloring their gigantic tents, which were transported on carts, twenty-two oxen drawing each cart.  The oxen were yoked in two ranks, eleven abreast.  And the shaft of the vehicle, he said, was as long as the mast of a ship." (p. 285)

Slavery viewed as a Christian virtue:


"One of [Prince Henry the Navigator]'s retainers, who called himself Lancarote - Lancelot - was awarded the first slave-hunting licence.  His caravels anchored at an island off the Guinea coast and raided a village: "And at last our Lord God, who rewards every noble act, willed that for the toil they had undergone in His service... they took captive of these Moors, what with men, women and children, 165, besides those that perished or were killed."...

Henry, as sponsor, was entitled to a royal fifth, but he gave his share of the slaves to friends and courtiers.  The successful voyage pleased him more than any profit, we are told, and he reflected "with great pleasure" upon the salvation of those souls which before were lost.

How remote it sounds, this medieval morality in which lives and bodies lay at the disposition of Christians.  Azurara observes that the lot of Moorish slaves "was now quite the contrary of what it had been, since before they had lived in perdition of soul and body... And now consider what a reward should be that of the Infante at the hands of the Lord God, for having thus given the the chance of salvation..." (p. 297)

And a few more:


"It's odd that [in the fifteenth century] nobody knew the shape of Africa.  Egypto-Phoenician explorers during the reign of Necho II, about 600 B.C., had sailed completely around the continent: they went down the Red Sea, doubled the Cape of Good Hope, and entered the Mediterranean at Gibraltar." (p. 300)

"A few years ago I was talking to a dealer in pre-Columbian artifacts who mentioned that Venetian glass beads sometimes are found in Sinu [people of Colombia] tombs.  He said he had seen lots of them in Colombia, but he did not buy any because they had no market value.  I asked how he could be sure it was Venetian glass, and he replied that he knew those beds when he saw them because he used to live in Venice.  Besides, Sinu Indians never made glass beads.  All of which means very little, unless you know that Sinu tombs date from about the twelfth century." (p. 315)

A test for a unicorn: "On this West shore we found a dead fish floating, which had in his nose a horne streight and torquet... being broken in the top, where we might perceive it hollow, into the which some of our sailors putting spiders they presently died.  I saw not the triall hereof, but it was reported unto me of a trueth: by the vertue whereof we supposed it to be the sea Unicorne." (p. 326)

New word: "I was shot in with a bullet at the battery alongst the huckle bone..."  (??? I've seen it defined as a hip bone and as a small ankle bone like the talus/astragalus).

Inca treasure:  "Replicas of Indian corn, each gold ear sheathed in silver, with tassels of silver thread.  Innumerable gold goblets.  Sculpted gold spiders, gold beetles, gold lobsters, gold lizards.  A gold fountain that emitted a sparkling jet of gold while gold animals and gold birds played around it.  Twelve splendid representations of women, all in fine gold... The list goes on and on, as Durer said, until one can hardly relate all of what was there.  Nevertheless, after the death of Atahualpa, some Inca nobles Poured a bucket of corn in front of the Spaniards, and one of them picked up a grain and said, "this is the gold he gave you."  And then, pointing to the heap on the ground: "This much he has kept." (p. 399)

"On Saint John's Day, June 24, 1527, Paracelsus surpassed himself.  Into the traditional campus bonfire went the accumulated rubbish of a year, whatever the students did not need or like.  And into the fire this year - at his command - went a gigantic book, the greatest of all medieval medical books, the Canon of Avicenna.  It was too big to be carried; it had to be dragged to the ceremonial fire. "There is more wisdom in my shoelaces," said Paracelsus, "than in such books."

The book is available on Amazon for about $14.  My gently-used copy is currently listed on eBay with a starting bid of $1.00.