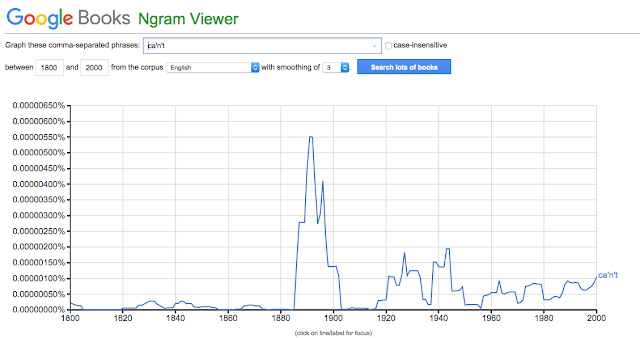 This week I was doing one final reread of Alice in Wonderland (a 1962 paperback version) and was struck by some archaic spelling:


"I've had nothing yet," Alice replied in an offended tone; "so I ca'n't take more."
"You mean you ca'n't take less," said the Hatter: "it's very easy to take more than nothing."

Elsewhere the same style was applied to wo'n't and sha'n't.

Just out of curiosity I ran ca'n't through Google's Ngram viewer (result above), which shows that double-apostrophe'd contractions have not disappeared (though I can't tell whether the modern usages are simply new editions of older books).

A quick web search yielded these comments by Lewis Carroll in his Preface to Sylvie and Bruno Concluded:


Other critics have objected to certain innovations in spelling, such as “ca’n’t”, “wo’n’t”, “traveler”. In reply, I can only plead my firm conviction that the popular usage is wrong. As to “ca’n’t”, it will not be disputed that, in all other words ending in “n’t”, these letters are an abbreviation of “not”; and it is surely absurd to suppose that, in this solitary instance, “not” is represented by " ‘t”! In fact “can’t” is the proper abbreviation for “can it”, just as “is’t” is for “is it”. Again, in “wo’n’t”, the first apostrophe is needed, because the word “would” is here abridged into “wo”: but I hold it proper to spell “don’t” with only one apostrophe, because the word “do” is here complete.