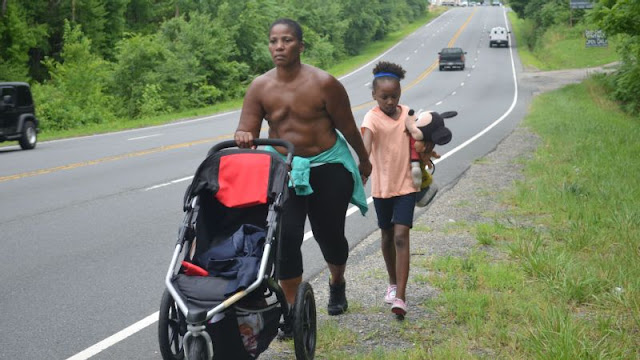 
Paulette Leaphart left her hometown of Biloxi, Mississippi, on April 30, intent on walking to Washington, D.C. -- a journey of 1,034 miles -- and arriving by June 27, her 50th birthday, a milestone her doctors weren't always confident she would reach.

She strides with a sense of purpose, acknowledging that her body is forever changed. Leaphart was diagnosed with Stage 2 breast cancer in January 2014. She underwent a double mastectomy and wears the scars as emblems of her struggle.

She wants to make sure Congress understands her experience and recognizes that her plight isn't unusual...


"I trained for this. When I got sick, I had to sell my cars. That made me walk to the doctor," Leaphart says, the memory still vivid. "I'd walk the 5 miles there, recover for an hour or two, then walk the 5 miles back."

Cancer treatment had an effect on her mouth. Many of her teeth are now chipped or broken, her molars useless.

"I need to get my mouth fixed, but do you know how much they want? Ten thousand dollars," Leaphart says, the number spilling from her lips with acrimony. 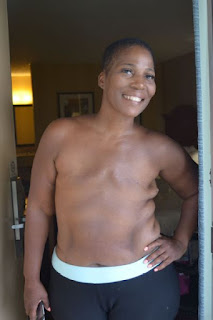 A deputy of the Spotsylvania County Sheriff's Office eases out of his vehicle, parked along Jefferson Davis Highway in Virginia. He and another officer have come to talk to Leaphart about her decision to walk bare-chested...

The officer's initial concern stems from social norms based on gender -- the idea that she should be wearing a shirt because she is a woman. The officers respectfully but firmly
insist that she wear a shirt...

Leaphart no longer has nipples. That's why she is allowed to walk around shirtless. In most states, indecent exposure is defined as exposing the genitals (breasts and nether regions). She explains this to almost every officer she meets. While respectfully challenging the police's reasoning, she also confronts society's definition of what it means to be a woman.

She made it, and is scheduled to meet with some legislators.


She has found the purpose for her pain, and as she stands on the steps of the Capitol building on her birthday, she utters three words: "Thank you, God."

More details at ESPN.  Credit for both photos to Latria Graham.

Addendum:  CNN has a longread report on Paulette Leaphart, suggesting that there are some discrepancies in her history and that the story may not be as straightforward as it is portrayed.