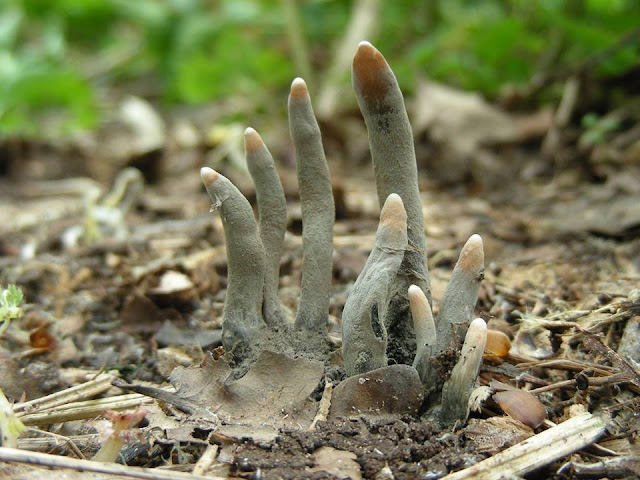 Neither fingers nor art, these projections come from Xylaria polymorpha, a saprobic fungus.


It is a common inhabitant of forest and woodland areas, usually growing from the bases of rotting or injured tree stumps and decaying wood. It has also been known to colonize substrates like woody legume pods, petioles, and herbaceous stems. It is characterized by its elongated upright, clavate, or strap-like stromata poking up through the ground, much like fingers.


Saprotrophic nutrition or lysotrophic nutrition is a process of chemoheterotrophic extracellular digestion involved in the processing of dead or decayed organic matter. It occurs in saprotrophs or heterotrophs, and is most often associated with fungi (for example Mucor) and soil bacteria. Saprotrophic microscopic fungi are sometimes called saprobes; saprotrophic plants or bacterial flora are called saprophytes (sapro- + -phyte, "rotten material" + "plant").