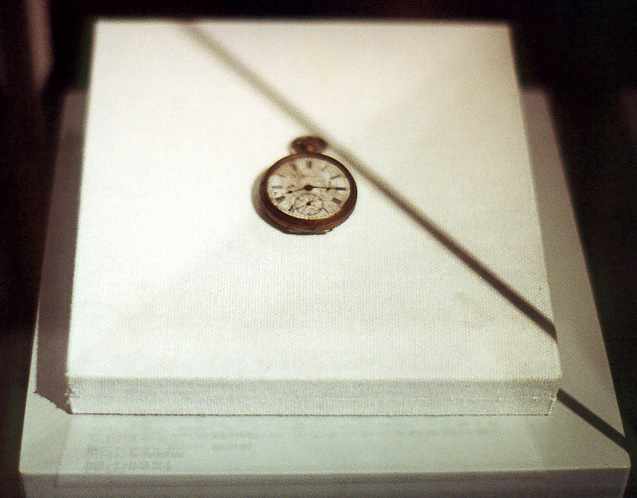 "All the watches found in the ground zero were stopped at 8:15 am, the time of the explosion."

President Obama's planned trip to Hiroshima has triggered a series of memorial articles, some of them revisiting the question of the necessity of the bombings.


In a 1963 interview on the use of the atomic bomb against Hiroshima, President Dwight D. Eisenhower bluntly declared that “…it wasn’t necessary to hit them with that awful thing.”...

Eisenhower was even more specific in his memoirs, writing that when he was informed by Secretary of War Henry L. Stimson the bomb was about to be used against Japan “…I had been conscious of a feeling of depression and so I voiced to him my grave misgivings, first on the basis of my belief that Japan was already defeated and that dropping the bomb was completely unnecessary, and secondly because I thought that our country should avoid shocking world opinion by the use of a weapon whose employment was, I thought, no longer mandatory as a measure to save American lives…”

Eisenhower was not alone. Many of the top military leaders, mostly conservatives, went public after World War II with similar judgments. The President’s chief of staff, William D. Leahy–the five-star admiral who presided over meetings of the Joint Chiefs of Staff–noted in his diary seven weeks before the bombing of Hiroshima: “It is my opinion that at the present time a surrender of Japan can be arranged with terms that can be accepted by Japan and that will make fully satisfactory provision for America’s defense against future trans-Pacific aggression.”...

Just a few weeks after the bombing, the famous “hawk” who led the Twenty-First Bomber Command, Major General Curtis E. LeMay, stated publicly that “The war would have been over in two weeks without the Russians entering and without the atomic bomb…the atomic bomb had nothing to do with the end of the war at all.”...

Fleet Admiral Chester W. Nimitz, commander in chief of the Pacific Fleet stated publicly two months after Hiroshima: “The Japanese had, in fact, already sued for peace before the atomic age was announced to the world with the destruction of Hiroshima and before the Russian entry into the war.” “The atomic bomb,” he stated “played no decisive part, from a purely military standpoint, in the defeat of Japan….”

More at the Salon article.  The counterargument (and the dominant justificatioin in American history articles) is that dropping the bomb saved lives by ending the war early.  That viewpoint persists to this day. Those who disagree and would like to argue with Eisenhower, Nimitz, and LeMay are welcome to do so in the Comments.

Photo via Fogonazos, where there is a gallery of images, many NSFW.