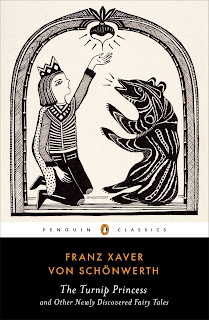 I've recently been reading The Turnip Princess and Other Newly Discovered Fairy Tales, by Franz Xaver von Schonwerth, compiled by Erika Eichenseer, and translated and commented upon by Maria Tatar.

Here is an example - "The Wolves"


A wealthy prince was married to a beautiful woman. The two had no children, and that was a source of great sorrow for the prince. As for the princess, she was consumed with envy whenever anyone in the kingdom gave birth to a child.

One day the prince and the princess were visiting a village, and they looked on as a festive group made its way into the local church. A farmer was having his triplets baptized, and everyone in the village had gathered to celebrate. The princess was planning to put a stop to the festivities, but the prince made fun of her, mocking the fact that she was aching to have something that a mere peasant possessed. It was her own fault that she had no children, he added. The princess flew into a rage right then and there and accused the farmer’s wife of infidelity, claiming that a woman could never have more than one child at a time with her husband. When the prince returned home, he held a mirror up to the princess’s face so that she could see how ugly she looked. To her horror, she saw in the mirror the head of a shaggy wolf, red-eyed, baring its teeth.

It turned out that the princess, without knowing it, was actually pregnant at the time. She gave birth to seven boys in seven days, one after another. She remembered what she had said earlier to the farmer’s wife. The prince was not at home, and she decided to send the midwife out to a wolf’s lair, with the seven boys wrapped up in an apron. It happened that the prince was hunting right in that area, and he ran into the midwife. “What are you doing here?” he asked. She immediately owned up to her evil intentions, and the prince rewarded her by running her through with a sword. He had the boys raised by a loyal subject.

Eighteen years went by, and the prince was planning a grand feast. Seven boys with long hair, all equally handsome and dressed alike, appeared at the feast. The princess could feel her heart pounding when she set eyes on the boys, and she began to tremble.

During the meal the prince jokingly asked how to punish a mother who throws her sons to the wolves. “She should dance to death in red-hot iron shoes,” was the answer. And so the princess condemned herself to that very punishment. The prince acknowledged the boys as his legitimate children, and they became known as “the wolves.

As this excerpt demonstrates, the tales in this collection are often more graphic and violent than those popularized by the Brothers Grimm.

Image and text via Flavorwire.