A guide to penis worm teeth 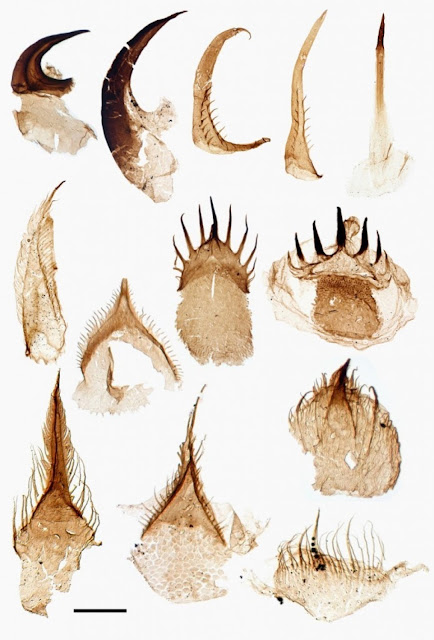 Palaeontology has published a detailed study of the teeth of priapulids in the Burgess Shale.


"As teeth are the most hardy and resilient parts of animals, they are much more common as fossils than whole soft-bodied specimens," he explained. "But when these teeth - which are only about a millimetre long - are found, they are easily misidentified as algal spores, rather than as parts of animals. Now that we understand the structure of these tiny fossils, we are much better placed to a wide suite of enigmatic fossils."

Not familiar with penis worms?  An article in Nature explains that understanding the anatomy of the priapulids is central to a proper understanding of evolution:


...a major step in evolution occurred when an embryonic ball of cells formed two indentations as opposed to one, giving way to a separate mouth and an anus rather than the single opening that creatures such as jellyfish and sea anemones have. In 1908, animals with a mouth and anus were divided into two groups. In the protostomes (from the Greek for ‘mouth first’), the mouth formed first, and the anus second. In the other, the deuterostomes (‘mouth second’), the mouth formed after the anus...

Today, the protostomes include priapulids and most other invertebrates. The deuterostomes include vertebrates such as humans and a few spineless animal lineages... Now, using molecular techniques to analyse gene expression, Hejnol and his team have revealed that a primitive protostome, the priapulid Priapus caudatus, develops like a deuterostome...

More details at the link, and at the Washington Post, where there is a video of a penis worm.  You learn something every day.