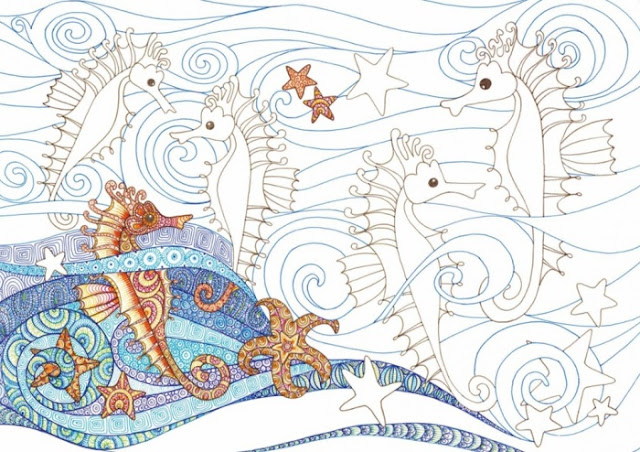 The bestselling title on Amazon in the US right now is not Harper Lee’s hugely anticipated second novel, Go Set a Watchman, or George RR Martin’s Song of Ice and Fire fantasy series, or even Zoella’s much-mocked but much-bought young adult hit, Girl Online. Instead, Scottish illustrator Johanna Basford is topping the charts, with her colouring books for adults taking top spots on Amazon.com’s bestseller lists...

And it is not just Basford who is reaping the benefits of the hordes of adults who, it turns out, just wanted something to colour in. In the UK, Richard Merritt’s Art Therapy Colouring Book sits in fourth spot on Amazon’s bestseller lists, Millie Marotta’s Animal Kingdom – detailed pictures of animals to colour – sits in seventh, and a mindfulness colouring book sits in ninth. Basford’s titles are in second and eighth place - that’s half of Amazon.co.uk’s top 10 taken up by colouring books for adults.

At independent UK publisher Michael O’Mara, which has sold almost 340,000 adult colouring books to date, head of publicity, marketing and online, Ana McLaughlin, attributes the craze to the way the category has been reimagined as a means of relaxation. “The first one we did was in 2012, Creative Colouring for Grown-Ups. It sold strongly and reprinted, but it was last year that it all really mushroomed with Art Therapy, in June. It really took off for us – selling the anti-stress angle gave people permission to enjoy something they might have felt was quite childish,” she said.

I purchased an adult coloring book and a set of colored pencils for my elderly mother, who has quite advanced dementia.  It has been received with some measure of success.