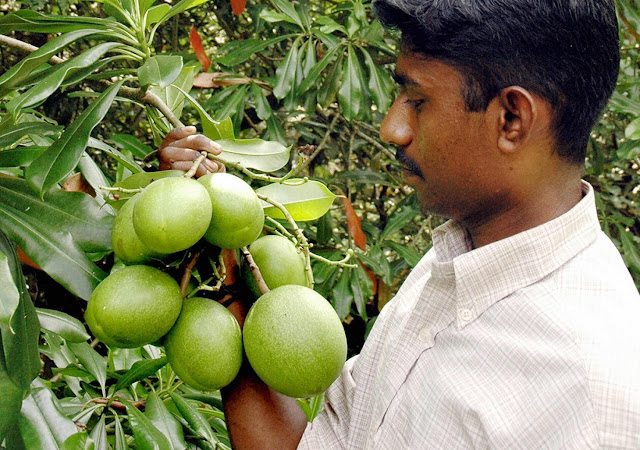 The plant, whose scientific name is Cerbera odollam, is as infamous as it is ubiquitous in Kerala, India, where it grows wild along the southwestern coast. The thin-branched, flowering tree bears a deadly harvest: a softball-sized fruit with seeds so toxic they can stop a heart. In the 19th century in Madagascar, where the tree is also found, thousands of people per year died after consuming the seed in “trials by ordeal” believed to determine whether they were guilty of witchcraft or other crimes. And a 2004 study found that it’s responsible for roughly a death per week in Kerala, most of them suicides. Researchers believe that more people have taken their own life using othalanga than any other plant in the world.

More information at the link, but I had to go to Wikipedia to find the pharmacologic basis of the toxicity:


The kernels of C. odollam contain cerberin, a potent cardenolide glycoside belonging to the cardiac glycoside family of toxins that includes digoxin. The poison blocks the calcium ion channels in heart muscle, causing disruption of the heart beat. This is most often fatal. Cerberin is difficult to detect in autopsies and its taste can be masked with strong spices. Therefore it is often used in homicide and suicide in India...

The seeds also have a long history as a poison in Madagascar. The poison was responsible for the death of 2% of the population (3000 people per year, 50,000 per generation) of the central province of Madagascar. The belief in the genuineness and accuracy of trial by ordeal using this poison was so strongly held among all, that innocent people suspected of an offense did not hesitate to subject themselves to it; some even showed eagerness to subject themselves to the test. On one occasion over 6000 people died in a single ordeal.

The toxin is therefore similar to the one incorporated into the bodies of Monarch butterfly caterpillars when they feed on milkweed.

And I'd bet it's been used for lots of murders.

Image credit: AFP via Getty Images, via the Washington Post.