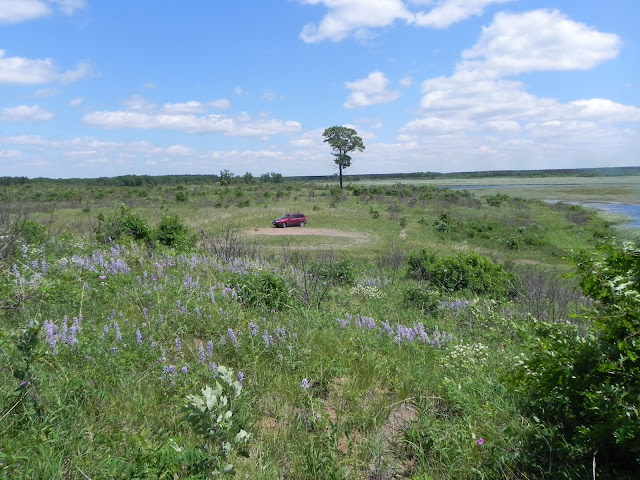 [originally posted June 2011] In between my other, more prosaic, duties this past week, I found time for a field trip to find and photograph the Karner Blue.  I wrote a blog post about the butterfly a little over a year ago -

It's interesting, and perhaps counterintuitive, that some of the best places to seek butterflies are not particularly "scenic" to a human eye.  I took the upper photo from the top of a hill overlooking Reed Lake at the Crex Meadows Wildlife Area in northwestern Wisconsin.  The surrounding countryside appears rather bleak, but it has one crucial feature - an abundance of lupine: 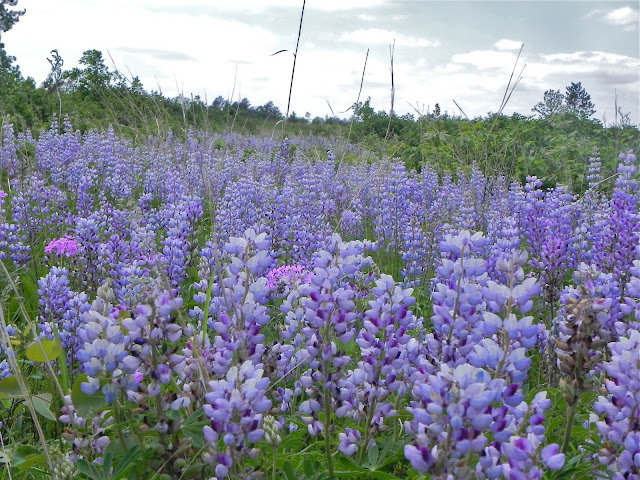 Lupine grows well in sandy, poor soils, and is quite at home in pine barrens and oak savannahs, and it is the sole food plant for the caterpillars of the Karner Blues.

When I got to Crex Meadows, the DNR staff reported that this year an abundance of Karner Blues had appeared, so I was hopeful of finally getting a good photo of this somewhat elusive butterfly on the Endangered Species list. Karner Blues show a sexual dimorphism in their color patterns, the males having beautiful cerulean sky-blue color to the wings on the upper surface.  The hard part is capturing that in an image, because they tend to rest with their wings upright: 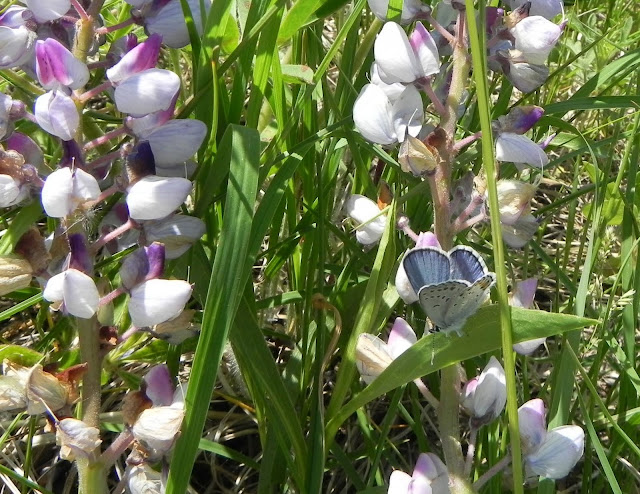 This fellow gave me glimpses of his blue, but flew away as I tried to get closer.   This other one was "puddling" for minerals at a sandy area, and let me hover above him, but I couldn't time the shutter to capture his wings flattened out. 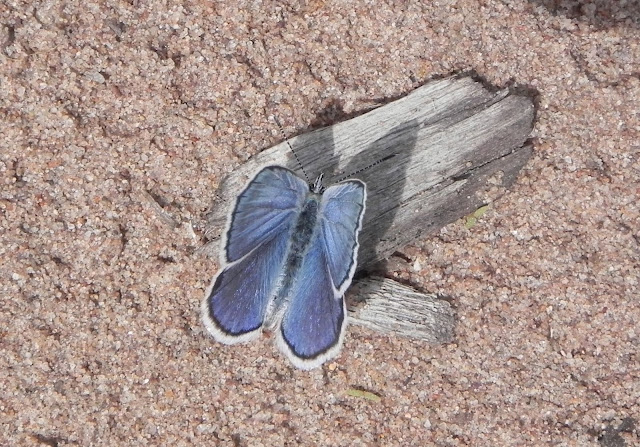 Shortly thereafter I saw a blue with specks of gold on the upper wing surface - the pattern of the female.  This one led me on a merry chase, but finally let me hover above her for her portrait. 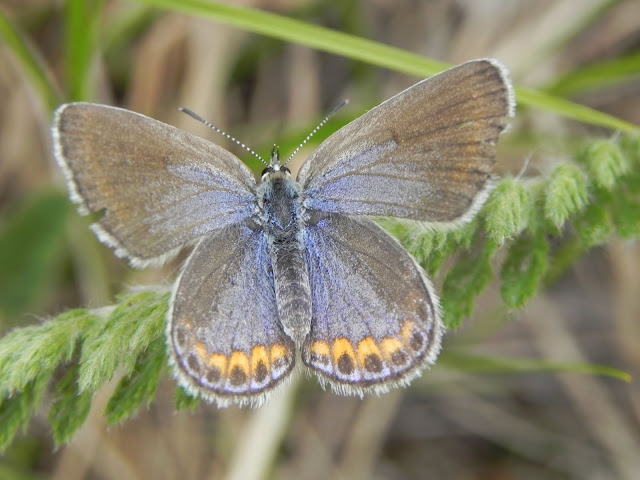 (click image for wallpaper size)  The camera autofocused on her thorax and antennae, and since the wings were a bit out of the plane and I had a limited depth of field, the wing tips are slightly out of focus, but you can see that she has been nipped on the wings once or twice during bird attacks, but managed to escape.

Addendum:  Reposted from June 2011 to append some information collected in 2014 by the Karner Blue Butterfly Recovery Program directed by the Wisconsin DNR:


Fifteen sites totaling 375 acres were surveyed in 2014 Those sites are found on ten separate properties including three private land ownerships. Karner populations once again dropped dramatically from 2013 with the exception of two properties...

Having compared Karner survey records from other states participating in Karner recovery across its range, it appears that other states in the Upper Midwest have experienced similar population declines and even extirpations since 2010. At the same time, Karner populations in New York and New Hampshire have been increasing.

We attribute the Wisconsin population decline primarily to adverse weather conditions over the past three years. Disruptions in the synchrony of lupine and nectar plant emergence and senescence with Karner flights is likely one of the negative factors. During droughty summers we have observed major lupine senescence by the end of the first flight and widespread senescence of nectar plants early in the second flight. We have also experienced erratic spring weather that has likely been detrimental to the survival of eggs and larvae...

Noting that private land Karner populations have increased, while public land populations have mostly decreased, we looked for contributing factors.. All three private lands were restored using cost-share funding, either from the U.S Fish and Wildlife Service’s Partners for Wildlife program, or Natural Resource Conservations Service’s Conservation Reserve Program for grassland preservation. All of these restorations involved intensive site preparation followed by seeding of dry prairie and barrens grasses, forbs, and lupine. The results show robust lupine patches surrounded by an abundance of nectar plants. Karner populations have generally remained strong or have increased on those sites.

Kudos to Bob Hess, the Karner Blue Butterfly Coordinator in the Bureau of Natural Heritage Conservation in Wisconsin's DNR and to other staff members there for their efforts in conserving (and restoring) the habitat for this endangered butterfly.  And a hat tip to Dan Sonnenberg for keeping me up to date on the current status of the Karner Blue.

Next month I hope to return to north-central Wisconsin to try to photograph this butterfly; I'll post the results here if I'm successful.