Remembering the animal casualties of war 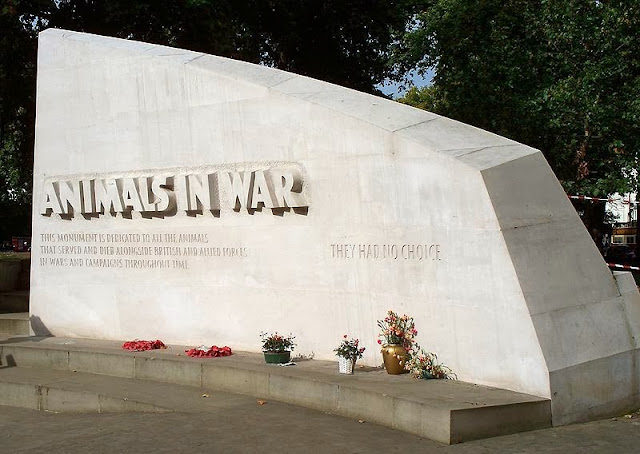 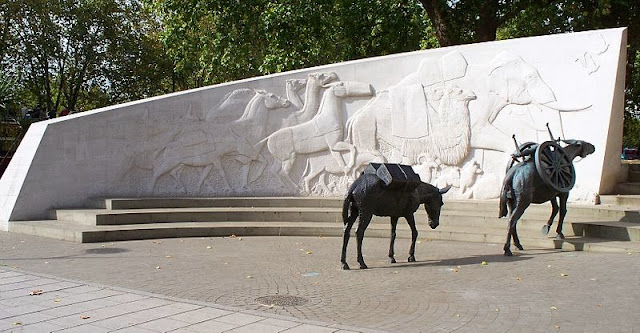 The sculpture in the photo is the Animals in War Memorial in Hyde Park.


The memorial was inspired by Jilly Cooper's book Animals in War, and was made possible by a specially created fund of £1.4 million from public donations of which Cooper was a co-trustee. The memorial consists of a 55 ft by 58 ft (16.8 m by 17.7 m) curved Portland stone wall: the symbolic arena of war, emblazoned with images of various struggling animals, along with two heavily-laden bronze mules progressing up the stairs of the monument, and a bronze horse and bronze dog beyond it looking into the distance.

The memorial focuses on service animals, but wartime also takes a substantial toll on pets:


The government sent out MI5 agents to watch animal rights activists, considered the mass euthanasia of all ‘non-essential animals,’ sponsored a clandestine anti-dog hate campaign and sanctioned the criminal prosecutions of cat owners for giving their pets saucers of milk.

The day Hitler invaded Poland, a BBC broadcast confirmed it was official policy that pets would not be given shelter. Panic-stricken people flocked to their vets’ offices seeking euthanization for their pets. That night, distressed animals cast out by their owners roamed the blacked-out streets, and five days of mass destruction followed.

London Zoo was also decimated. The black widow spiders and poisonous snakes were killed, as were a manatee, six Indian fruit bats, seven Nile crocodiles, a muntjac and two American alligators. Two lion cubs were put down, too.

The Animals in War Memorial has two separate inscriptions.  The large one reads:


"They had no choice"