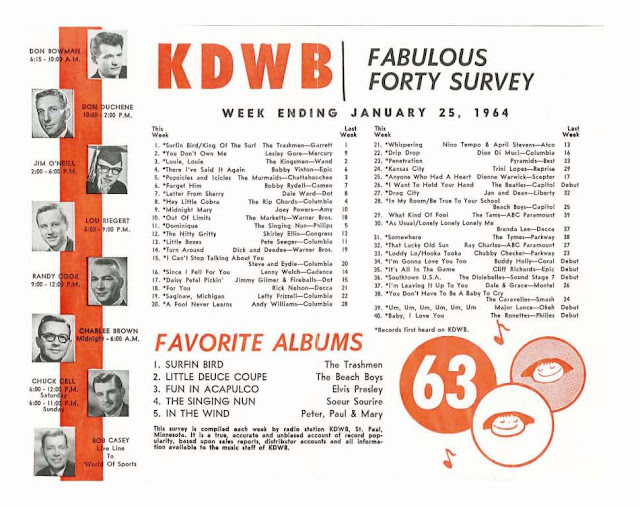 There's something very interesting about the "top 40" list above.  It's from a popular St. Paul/Minneapolis AM radio station in January of 1964, and it's loaded with what are now considered "golden oldies."  But this particular list brings back a flood of memories because of one entry.  Browse the list (click for bigger) before proceeding below the fold...

YMMV, but for me the salient entry is song #26 ("I Want To Hold Your Hand"  The Beatles - Capitol.  Debut.)  I remember standing in my high school's parking lot one afternoon that week, with my hair frozen*.  A classmate I was riding home with described a new song and my response was "Beetles?  Like insects?"

That's when it all started for me.  For many of my generation the memory of when we first heard The Beatles is as strong as when we heard of JFK's assassination.

I wonder how long it was before the Beatles fell off that top 40 chart.  Many years, I should think.

* (we had basketball practice as the last activity of the day, and after you showered and stepped outdoors your hair would at least frost up and sometimes totally freeze if you hadn't towelled it dry enough)