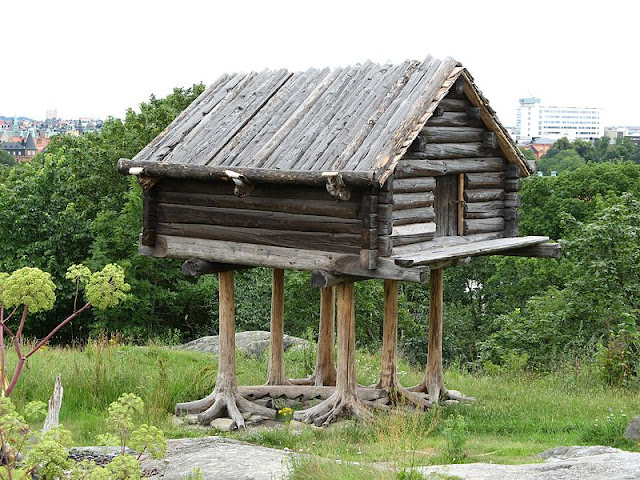 Traditional raised Sami storehouse, displayed at Skansen, Stockholm. A similar structure, the izbushka, is mentioned in Russian children stories as a house with chicken feet.

I haven't found any further information on this design.  The izbushka is mentioned in a Wikipedia article on Baba Yaga:


He journeyed onwards, straight ahead [...] and finally came to a little hut; it stood in the open field, turning on chicken legs... Ivan walks for some time before encountering a small hut identical to the first... After walking for some time, Ivan eventually finds the chicken-legged hut of the youngest of the three sisters turning in an open field.

There are a number of images of chicken-legged huts retrievable at Google Images, most of them related to the Baba Yaga tale.

I would have to assume that the Sami structure is a practical rather than a whimsical creation, developed in response to the types of wood/driftwood available and probably the presence of a difficult-to-penetrate (frozen) ground or unstable (thawing) tundra and the need to elevate the storehouse above predators.

No time to look it up now.  Some readers may wish to pursue the matter on their own. 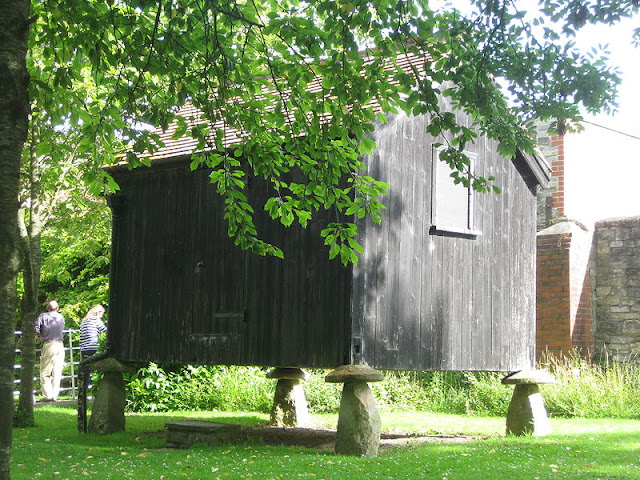 ...originally used as supporting bases for granaries, hayricks, game larders, etc. The staddle stones lifted the granaries above the ground thereby protecting the stored grain from vermin and water seepage. In Middle English staddle or stadle is stathel, from Old English stathol, a foundation, support or trunk of a tree...

The staddle stones usually had a separate head and base which gave the whole structure a 'mushroom' like appearance. Different areas in the United Kingdom had different designs. The base varied from cylindrical to tapered rectangular to near triangular. Flat topped cone shaped staddle stones are to be found in parts of the Isle of Wight. The tops are flat to support the beams, however some variation does exists, such as square tops, fluted designs, slate tops, etc.

Old land deeds in northeastern United States often refer to Oak Staddle or Walnut Staddle. These deeds are from the late 18th century to the middle 19th century. Either the owners would cut a tree leaving the stump and request that the surveyors measure to it, or the surveyor would measure out to the location of a new lot corner and a staddle would be inserted into the ground like a boundary stone.