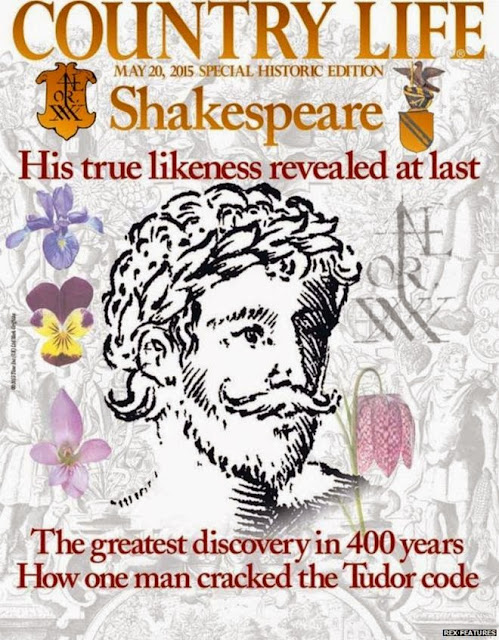 Excerpts from an interesting report in The Guardian:


The botanist and historian Mark Griffiths on Tuesday claimed that he had discovered what he firmly believes is the only demonstrably authentic portrait of Shakespeare made in his lifetime.

He argues that an engraving on the title page of a 400-year-old book about plants contains four identifiable figures - one of whom is the Bard aged 33 looking very different from the round-faced bald man we know from the First Folio of his collected works...

The work by William Rogers, England’s first great exponent of copperplate engraving, is on the title page of a groundbreaking 1598 book, The Herball or Generall Historie of Plantes, by the horticulturist John Gerard.

It is full of elaborate decorative devices, flowers and symbols which surround four male figures, who had generally been assumed to be allegorical.

Griffiths, in the course of writing a book about Gerard, decided to discover who the men might be. He had to crack an elaborate Tudor code of rebuses, ciphers, heraldic motifs and symbolic flowers, which were all clues pointing to the men’s identities.

The relatively easy ones were Gerard himself, the renowned Flemish botanist Rembert Dodoens and Queen Elizabeth’s chief minister and closest adviser Lord Burghley, who was Gerard’s patron. That left the tricky fourth man, bottom right...

This claim has been disputed and childishly mocked ("So apparently Shakespeare went around in fancy dress holding a fritillary in one hand and a cob of corn in the other.") by various Shakespeare scholars.

What fascinates me is the juxtaposition of the images of Shakespeare and Lord Burghley:


Griffiths believes Shakespeare was given his literary start by Burghley, the most powerful man in the country and that he became almost a political propagandist for him.

If you accept that theory, then Shakespeare would have moved in the same circles as Gerard, as both men had Burghley to thank for their careers.

Griffiths said his theory was that Shakespeare helped Gerard with Greek and Latin translations in the book and acted as a kind of script doctor. So the four men are the writer himself, his patron, his inspiration (Dodoens) and his literary adviser.

"...the identification of Gerard, Burghley and Dodoens was straightforward because they look like existing portraits."

Lord Burghley was William Cecil, the chief advisor and spymaster for Queen Elizabeth, inarguably one of the most prominent, educated, and influential men of his time.  He was known as a book-lover, and his home contained one of the premier private libraries of Elizabethan England.  In 1562 John de Vere, the 16th Earl of Oxford died; his son became a royal ward of the Queen and was placed in the household of William Cecil.  That 12-year-old boy was Edward de Vere, who would have been in his 30s when this herbal was published.

Addendum:  Here is the rebus under the figure in the frontispiece reputed to be Shakespeare: 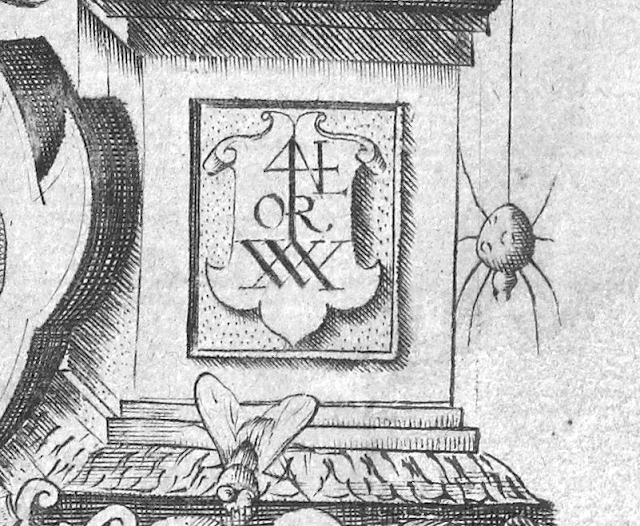 From the full herbal, which can be viewed fulltext online at The Folger Shakespeare Library.  As noted at the Guardian link, Griffiths read the rebus as "In Elizabethan times, people would have used the Latin word “quater” as a slang term for a four in dice and cards. Put an e on the end and it becomes quatere, which is the infinitive of the Latin verb quatior, meaning shake."

Addendum:  Just for fun, I made a mashup of the face in the herbal with the "Hilliard miniature," previously claimed to be a portrait of Shakespeare:

I flipped the latter left-right to facilitate comparison.  Note also that the laurel wreath on the head of the left figure is a traditional item designating a poet.

I note that an article in The Spectator suggests that the face in the herbal could represent Sir Walter Raleigh.

Email ThisBlogThis!Share to TwitterShare to FacebookShare to Pinterest
Labels: Shakespeare