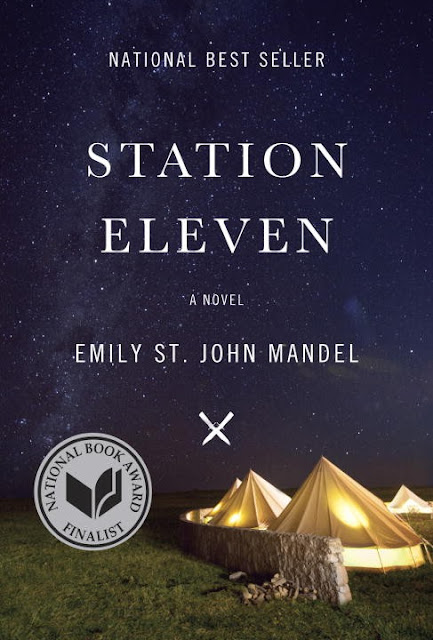 I've been a fan of postapocalyptic fiction ever since first encountering A Canticle for Leibowitz over 50 years ago.  Station Eleven fits nicely into that genre, although the author apparently dislikes the term "science fiction," since she relies so little on science and wants to focus on developing the characters and their interlaced stories.

The novel follows a group of actors and musicians who have formed a "traveling symphony" around the Great Lakes region "because survival is insufficient."  The underlying premise of a pandemic plague was in my view difficult to accept because of the extent of the depopulation (99.9%) and thre rapidity with which such occurs (several months), but I'm willing to grant the author that concession in order to let her set her world in motion, because she has a pleasant way with words - as, for example, when the protagonist is having a mild disagreement with her significant other: "The... argument had lost all of its sting over the years and had become something like a familiar room where they met."

This was an easy read and a pleasant one, postapocalyptic in the sense that the order of the world has been disturbed, but the novelist after describing the chaos and lawlessness and incorporating it into the story, doesn't dwell on the dystopian features (unlike for example Cormac McCarthy's The Road).

The novel won the Arthur C. Clarke Award and the Toronto Book Award in 2015 and was nominated for the National Book Award.  Readers of this blog are invited to offer mini-reviews in the Comments.