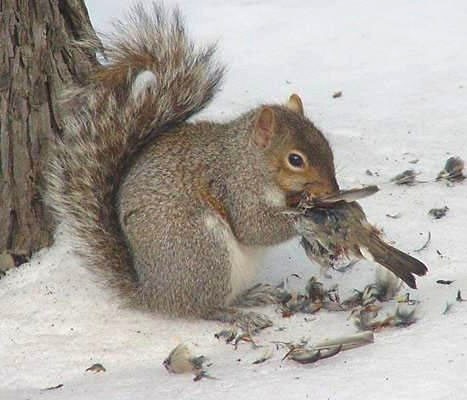 I suppose I shouldn't have been surprised by the image above (source unknown, but it has been circulating on the 'net since at least 2005). Squirrels are, after all, rodents and therefore at least potentially omnivorous. The photo depicts a wintertime event, when opportunistic carnivorous behavior might be predicted. Googling the phrase yields only 13 hits, typically to blogs where writers express their surprise and sometimes dismay/disgust.

The most extreme example of carnivory I encountered was a BBC report of a pack of squirrels attacking, killing, and eating a stray dog.

On a lighter note, and of perhaps more interest is the etymology of the word "squirrel" - "via Anglo-Norman esquirel from the Old French escurel… The word itself comes from the Greek word skiouros, which means shadow-tailed, because they use their tail to shade their whole body."

Update Feb 2011:  the reports continue to accumulate, and a Google search of the phrase now yields over 2,000 hits (though some re bird egg, or bird seed).

Reposted from 2009 because this post keeps getting interesting comments.