Was Cinderella a slut? 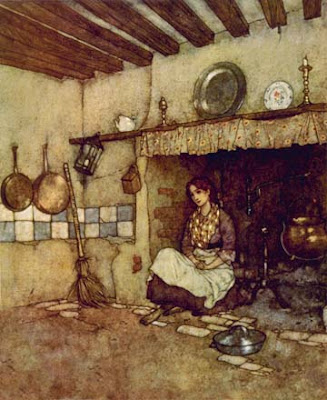 After having been recently reminded of the illustrations of Edmund Dulac, I decided to read a book of children's fairy tales illustrated by him.  In a Cinderella story "retold by Edmund Quiller-Couch" (1910, I think) I found this passage when she was being verbally abused by her step-sisters:


"Look at your hands--faugh!  How can you suppose we should allow you to touch a ribbon, or even come near us, with such hands?  Run downstairs, slut, and put yourself under the kitchen pump..."


"When she had done her work she used to creep away to the chimney-corner and seat herself among the cinders, and from this the household name for her came to be Cinder-slut; but the younger sister, who was not so ill-tempered as the elder, called her Cinderella."

Quiller-Couch is obviously using the term in the sense of "slattern."  And that's how the OED defines "slut." The first definition is "A woman of dirty, slovenly, or untidy habits or appearance," and the secondary ones include "a kitchen maid" and "a woman of low or loose character; a bold or impudent girl."  That last one comes closest to the sexual connotations of modern usage.

So the next time you encounter a girl who is besmirched from sliding head-first into third base or changing the oil in the car, you can say "you need to clean yourself up, slut" and the OED will back you up.  But make sure she isn't still holding the wrench.