"Human history becomes more and more a race between education and catastrophe." 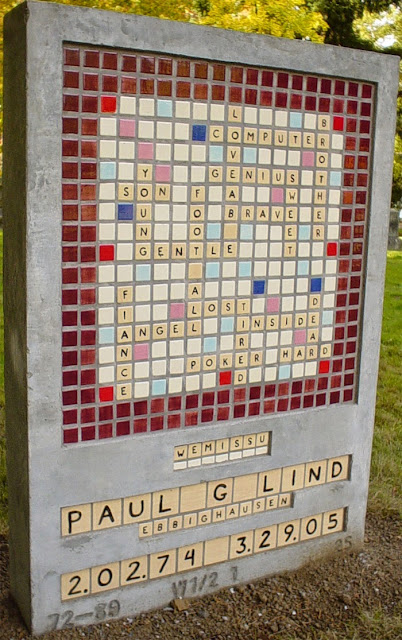 Archaeologists in Bulgaria have uncovered another "vampire grave" dating to the first half of the 13th century:


"The skeleton, thought to be of a man aged between 40 and 50, had a heavy piece of ploughshare – an iron rod, used in a plough – hammered through its chest. The left leg below the knee had also been removed and left beside the skeleton."

"A Raleigh County [West Virginia] man pleaded guilty Thursday to repeatedly faking compliant water quality standards for coal companies, in a case that raises questions about the self-reporting system state and federal regulators use as a central tool to judge if the mining industry is following pollution limits."  Apparently self-reporting of compliance with environmental standards is unreliable???  I am shocked, shocked... 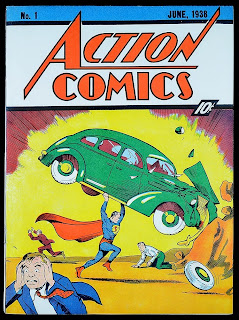 Casebook: Jack the Ripper claims to be "the world's largest public repository of Ripper-related information."

This Reddit thread will link you to a complete scan of the first issue of Action Comics (the first Superman comic).

The BBC has a lengthy and well-written article on the history of lead intoxication in humans.

A video from 1947 explains why you should consider a career as a librarian.

One reader of TYWKIWDBI emailed me to report that the right sidebar was "vibrating" while he was viewing the blog.  I had not heard of such a problem before, but I located a webpage discussing this as an occasional problem related to the presence of the "followers" (I've retitled it "like-minded people") gadget in the sidebar.  This defect is experienced by users of Chrome browsers at certain zoom levels.

Is Crossfit a cult?

Ars Technica has a review of OSX 10.10 Yosemite.

A man who developed a deep venous thrombosis and a variety of complications from it explains why you should consider working at a standing desk or at least stop sitting at your desk for hours at a time.

Deformutilation offers three galleries of photos of a Tibetan sky burial.   Part I focuses on the "body breakers" who chop up corpses: "Hatchets and cleavers are used to make precise cuts in the flesh, which is then carved into chunks of 'meat'. The internal organs are then cut into pieces, the bones are smashed  and then mixed with tsampa, roasted barley flour. This pulverized bone mixture is then scattered on the ground the birds descending to eat their meal..." Part II is here.  And Part III.  This donation of human flesh to the vultures is considered virtuous because it saves the lives of small animals that the vultures might otherwise capture for food."  I shouldn't need to warn you that the images are graphic. 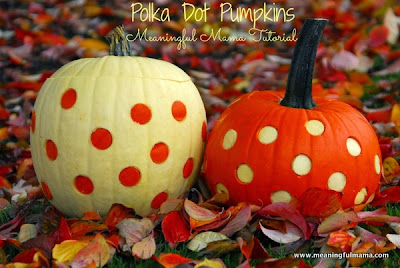 You can use an apple corer to create "polka-dot pumpkins." Clever. We may try this next year. This and other ideas at Homes and Hues.

Archaeologists have uncovered the remains of a sphinyx from underneath sand dunes in California.

Because the UK does not offer assisted suicide, an elderly woman successfully starved herself to death.  "The former maths teacher, 86, did not have a terminal illness, but suffered a range of conditions that made her life uncomfortable including chronic back pain and fainting episodes."

Archaeologists have found evidence of a human campgrounds at an elevation of 14,700 feet (4,480 meters) in the Peruvian Andes, dating to about 12,400 years B.P.

The "Giant Rock" in the Mojave Desert is quite interesting.

For several minutes, Crouch and her husband Allen watched as pieces of fresh, raw meat, some “delicate shreds as light as a snowflake” and others “a solid lump three inches square” fell from the sky. Mrs. Crouch said she was “impressed with the conviction that it was either a miracle or a warning.” The Crouchs’ cat, less concerned about meaning of the meat than his masters, "immediately gorged himself with the public breakfast so unexpectedly tendered to him." When it was over, the “Kentucky meat shower,” as it came to be known, left an area of the farmyard 100 yards long and 50 wide strewn with flesh. “Particles of meat” were found “sticking to the fences and scattered over the ground.”

It was real, and not a prank.  A logical explanation is provided at Mental Floss.

The Telegraph offers a gallery of terrible real-estate-for-sale photographs, including this toilet-in-the-kitchen: 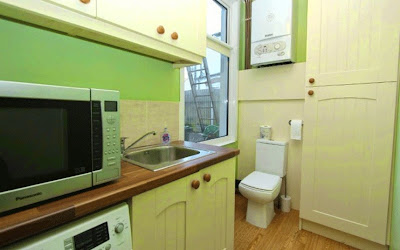