America functions as an oligarchy, not as a democracy

Who really matters in our democracy — the general public, or wealthy elites? That's the topic of a new study by political scientists Martin Gilens of Princeton and Benjamin Page of Northwestern. The study's been getting lots of attention, because the authors conclude, basically, that the US is a corrupt oligarchy where ordinary voters barely matter...

The Vox link discusses these conclusions in some detail.  This graph shows the probability of a policy being adopted by the U.S. vs the percentage of the general population that agrees with the policy: 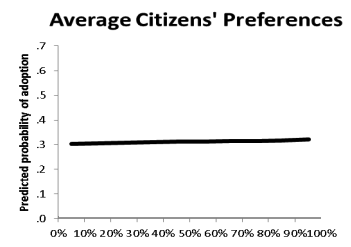 And this one shows the approval probability vs the preferences of the economic elite and special interest groups:

The study is here.  This from their Abstract: