Plight of the Monarch butterfly - updated 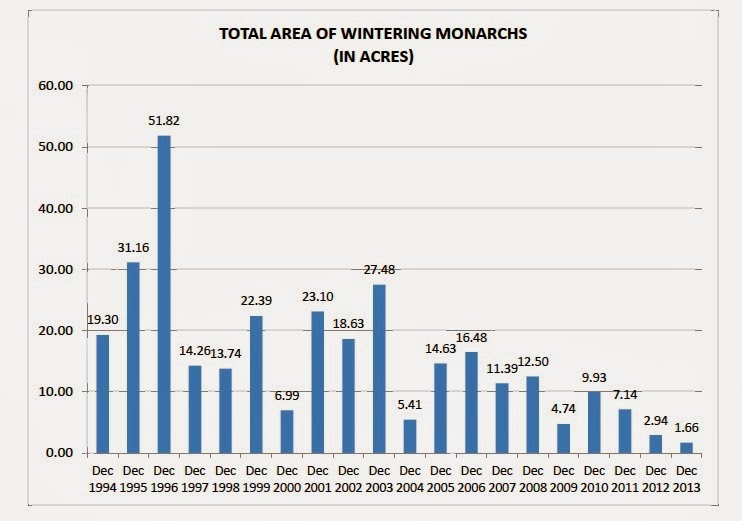 The graph above was published in the Badger Butterflyer - the e-newsletter of the Southern Wisconsin Butterfly Association.  The bar graphs depict the 20-year trend of the acreage in Mexico utilized by overwintering Monarch butterflies.  This past December's 1.66 acres of wintering butterflies is the lowest ever recorded since recordkeeping began.

The cause is multifactorial, including loss of habitat in Mexico and weather/climate changes, but the principal factor is believed to be loss of milkweed - the Monarch's ONLY food plant.  An article at Slate takes up the story:


More than a million acres of Upper Midwest grassland have been plowed under in recent years for corn and soybean fields—a rate of loss comparable to deforestation in places like Brazil and Indonesia. Demand for these crops has surged with the rise of biofuels. At the same time, technology enabled farmers to squeeze ever more from each acre. For monarchs, the most important development was Roundup Ready corn and soybeans.

Since the turn of the century, these genetically modified crops have risen to
dominance in the Midwest. Designed to withstand dousing from the Monsanto company’s Roundup weed killer, the plants enabled farmers to swiftly kill competing weeds, including milkweed, while leaving their crops untouched. In 2013, 83 percent of all corn and 93 percent of soybeans in the United States were herbicide tolerant, totaling nearly 155 million acres, much of it in the Midwest.

It’s no coincidence monarchs faltered at the same time. Karen Oberhauser, a conservation biologist at the University of Minnesota, and a colleague estimated that as Monsanto’s Roundup Ready corn and soybeans spread across the Midwest, the amount of milkweed in farm fields fell by more than 80 percent. Oberhauser determined that the loss of milkweed almost exactly mirrored the decline in monarch egg production...

Already, Iowa farmland has lost more than 98 percent of the milkweed that was once there, according to Iowa State University biologist John Pleasants, who worked with Oberhauser. He’s seen firsthand the transformation as he has studied cornfields during the past decade and a half. Before Roundup, patches of milkweed grew among the corn and along the edges of fields. After the herbicide—nothing but corn...


Common milkweed, asclepias syriaca, can become a serious problem over time in no-till fields and hay and pasture fields where glyphosate-resistance in the crop is not an option. This weed has an extensive and deep root system and is tolerant to many common herbicides. Multiple herbicide applications are often required...

In glyphosate-resistant crops, milkweed control is not difficult to control. Glyphosate [Roundup], when applied at the proper rate and timing, will give good control. In glyphosate-resistant corn and soybeans, milkweed should be treated with glyphosate at 0.75 lbs a.e./acre glyphosate to control or suppress milkweed. It is always recommended to include 17 lbs spray-grade ammonium sulfate per 100 gallons of water. Late, post-emergent applications when plants are in the bloom stage will be most effective in killing roots...

In hay or pasture, milkweed can be spot-treated with glyphosate applied with a wipe-on applicator while the milkweed is taller than the crop, or spot-treated with a hand-sprayer. When these fields are rotated or renovated, that is the time to make your best effort to deal with milkweed aggressively. Fence rows, field borders and nearby, non-crop areas should be monitored and any milkweed found should be controlled.

And this from Britain's Guardian:


The announcement [of the decreased Mexican overwintering population] followed on the heels of the 20th anniversary of the North American Free Trade Agreement, which saw the United States, Mexico and Canada signing environmental accords to protect migratory species such as the Monarch. At the time, the butterfly was adopted as the symbol of trilateral cooperation.

“Twenty years after the signing of NAFTA, the Monarch migration, the symbol of the three countries’ cooperation, is at serious risk of disappearing,” said Omar Vidal, Omar Vidal, the World Wildlife Fund director in Mexico.

This coming weekend I will be attending the annual late-winter Garden Expo here in Madison, where thousands of cabin-fevered Midwesterners will flock to see the latest in garden products and technology.  I'll be helping staff the information booth for SWBA;  I hope to be handing out ziplock baggies of milkweed seeds to likeminded people who want to do something to help sustain the Monarchs. 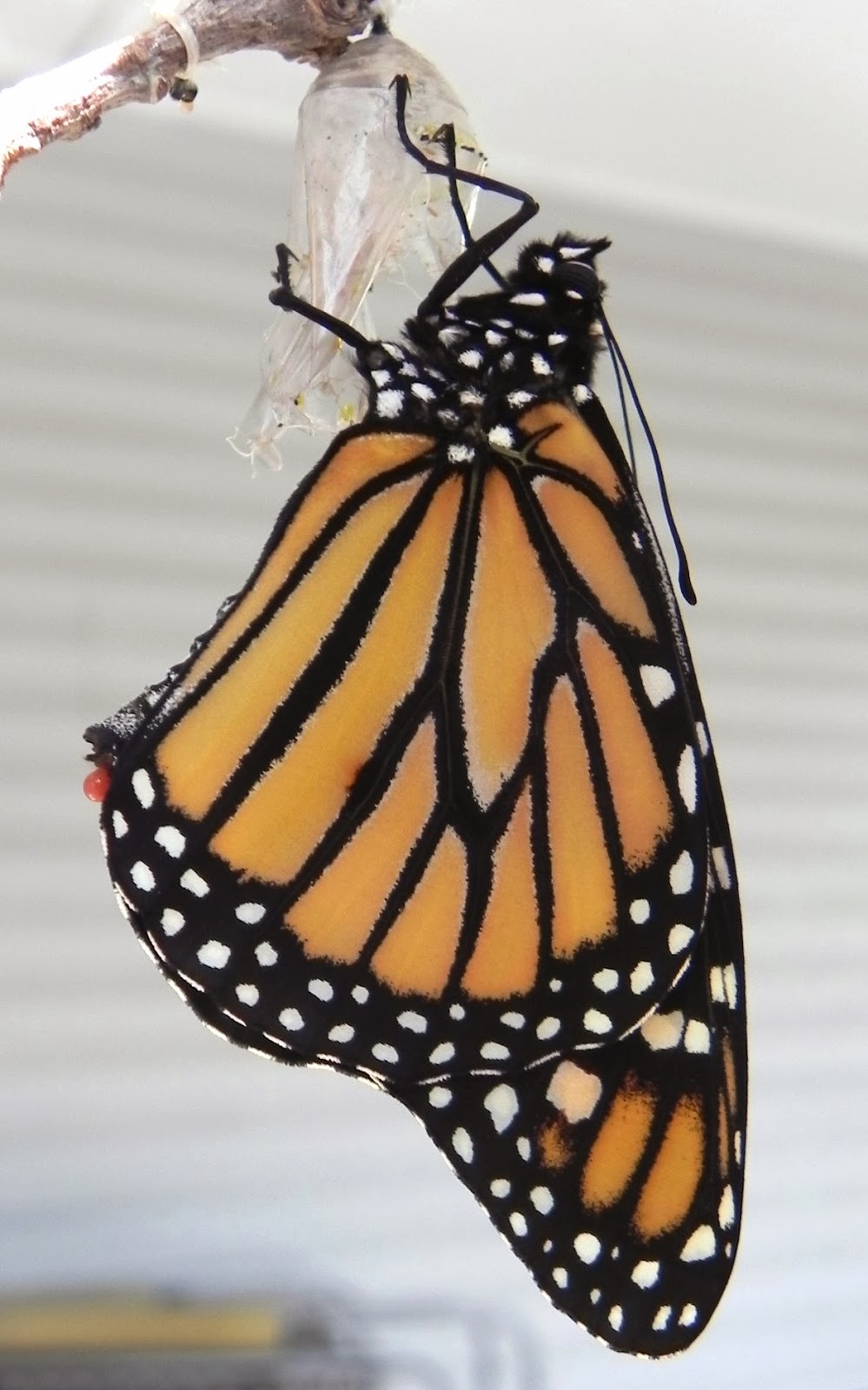 Reposted from 2014 to add some new data (excerpts from a press release by the Monarch Joint Venture and a report by CBS News):

[Note:  the bar graph at the top of this post depicts forest area occupied by Monarchs from 1994 to 2013.  This graph updates the numbers with seven more bars through the end of 2020]

"The government commission for natural protected areas said the butterflies’ population covered only 2.1 hectares (5.2 acres) in 2020, compared to 2.8 hectares (6.9 acres) the previous year and about one-third of the 6.05 hectares (14.95 acres) detected in 2018...
Gloria Tavera, the regional director of Mexico’s Commission for National Protected Areas, blamed the drop on “extreme climate conditions,” the loss of milkweed habitat in the United States and Canada on which butterflies depend, and deforestation in the butterflies’ wintering grounds in Mexico." 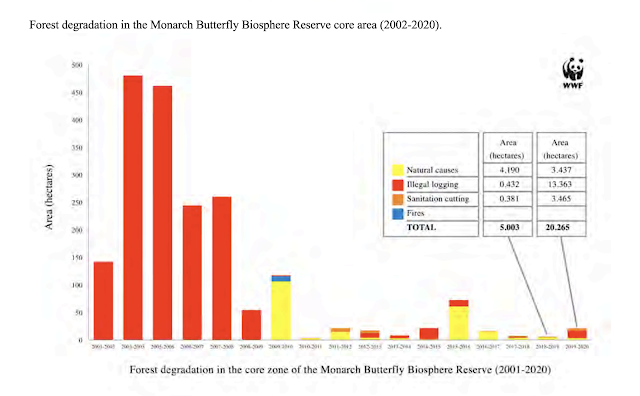 "Illegal logging in the monarchs wintering rounds rose to almost 13.4 hectares (33 acres), a huge increase from the 0.43 hectare (1 acre) lost to logging last year.
Jorge Rickards of the WWF environmental group acknowledged the lost trees were a blow, but said “the logging is very localized” in three or four of the mountain communities that make up the butterfly reserve.
In addition, wind storms, drought and the felling of trees that had fallen victim to pine beetles or disease, caused the loss of another 6.9 hectares (17 acres) in the reserve, bringing the total forest loss in 2020 to 20.65 hectares (51 acres). That compares to an overall loss of about 5 hectares (12.3 acres) from all causes the previous year...
Tavera also expressed concern about the severe winter storms in Texas, which the butterflies will have to cross — and feed and lay their eggs — on their way back to their northern summer homes in coming months.

“This is a cause for worry,” Tavera said, referring to whether the monarchs will find enough food and habitat after the winter freeze."