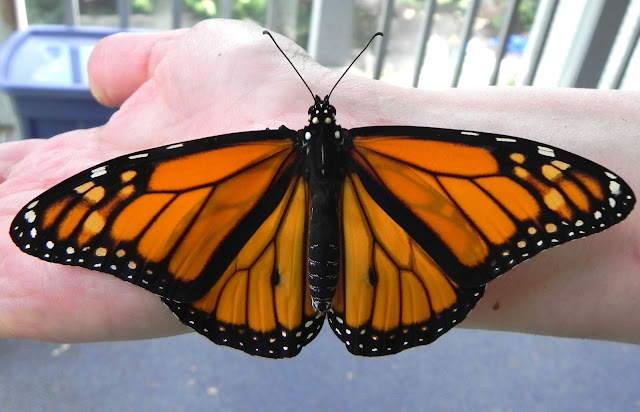 I've watched the process many times, but it never fails to amaze me.  Today because of family obligations I had to miss a field trip with other enthusiasts to a butterfly "hot area" along the Wisconsin River.  But while I was at home, one of the Monarchs we had raised from an egg went through the process of eclosion; I've not previously documented the sequence for the blog, so I sat by the table on the screen porch (reading Cloud Atlas), waiting for the event. 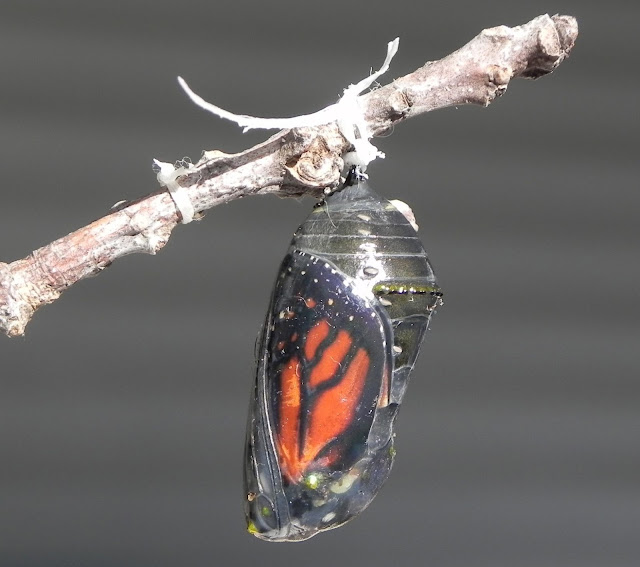 A glance at the chrysalis shows why it the eclosion was obviously going to be today.  The extraneous material at the top of the photo reflects the fact that we repositioned this chrysalis from its original location onto a stick.  To do this you need to make use of a tiny cremaster at the top of the chrysalis, using either glue or a tie.  A surgical suture works well, but if you don't have access to medical supplies, a bit of dental floss can suffice. 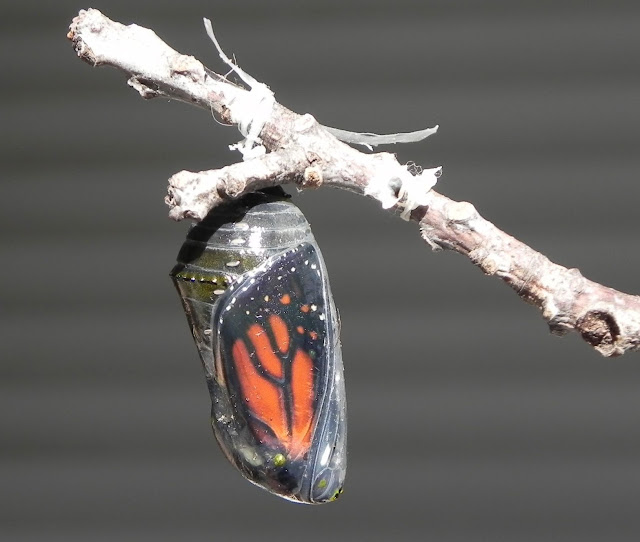 A view from the other side.  The head is at the very bottom.  Between the wings is the abdomen. 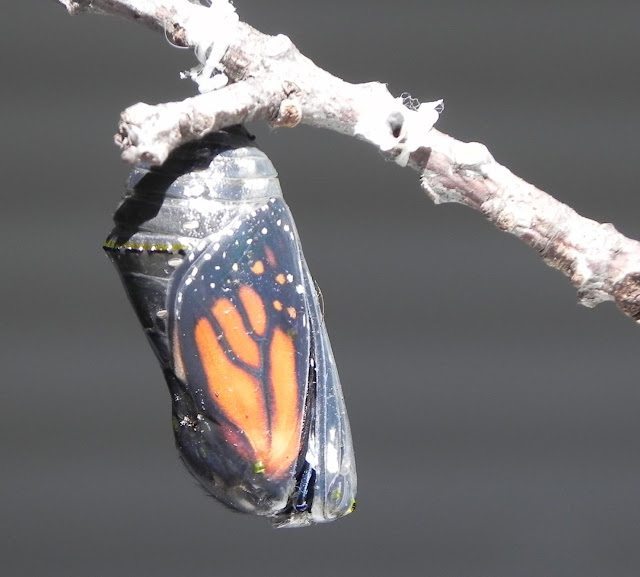 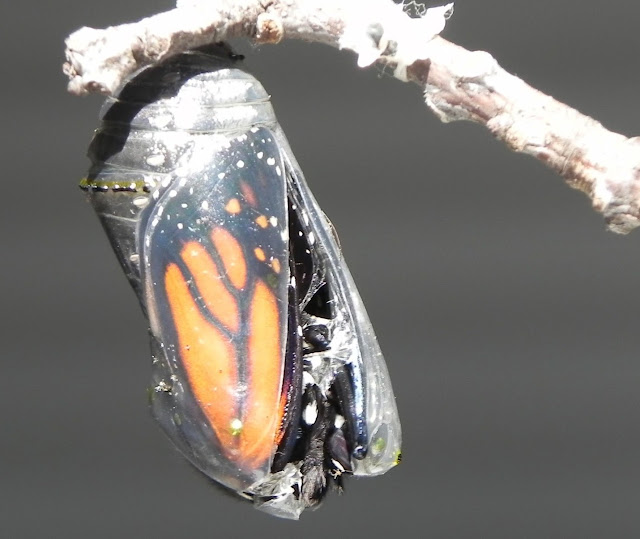 ... and the butterfly begins to emerge. 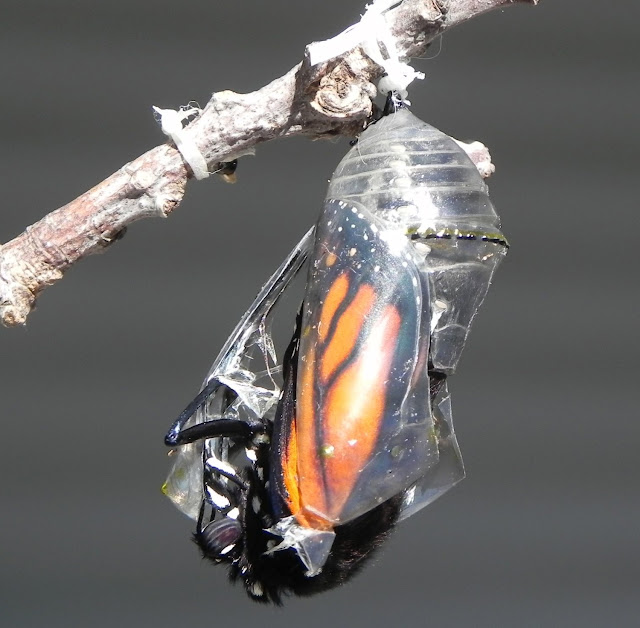 Switching back to the other side for a better view.  The head is free and he is grabbing the shreds of the chrysalis for a firm grip to support... 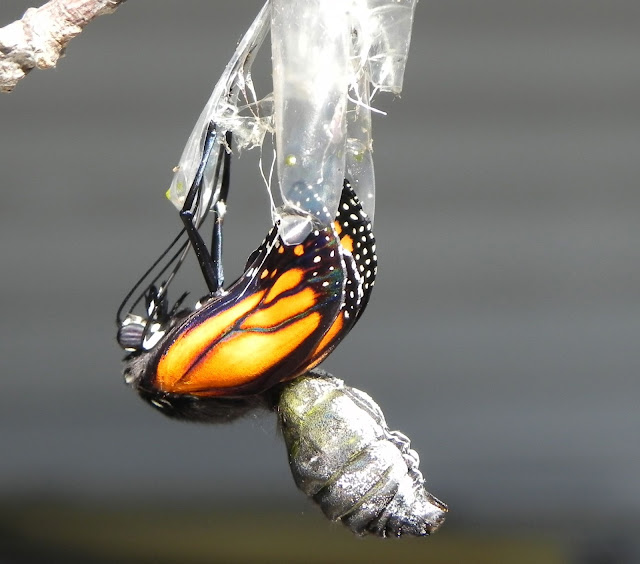 ...the large abdomen, which pops out next.  That's all that's left of the "caterpillar-like" phase of his existence.  His antennae are now unwound. 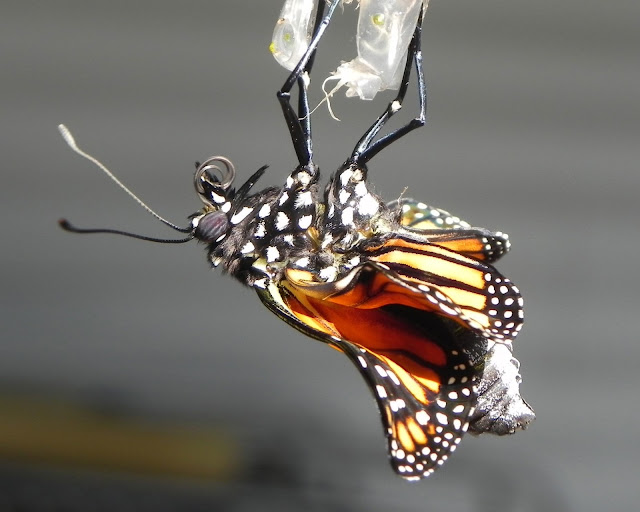 Fully out, and hanging on for dear life.  The wings have come free, but at this early stage they are still soft and pliable.  The proboscis is coiled in front of his face. 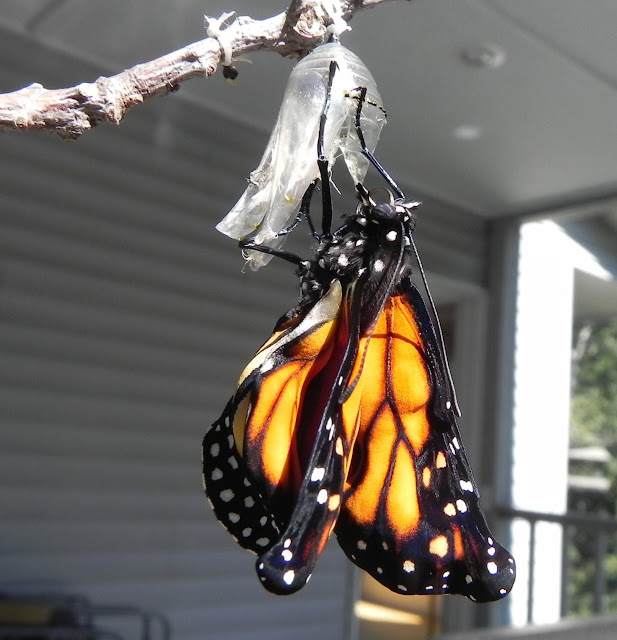 Now comes the crucial phase; we never disturb a Monarch at this point.  He has to hang with his wings vertical and pump fluid from that distended abdomen through those dark veins to "inflate" the wings.  If he loses his grip and falls to a flat surface, he has to find somewhere to climb quickly, because if the wings harden in a crinkled shape he will be unable to fly. 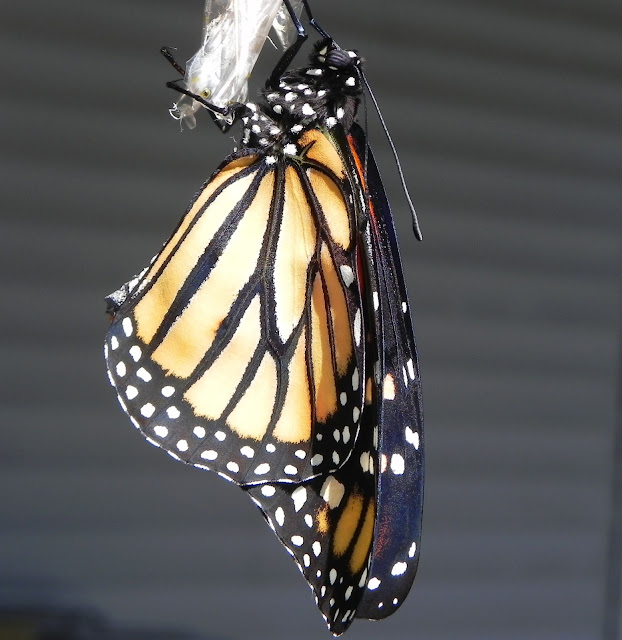 A few minutes later the progress is evident.  At this point the wings are still soft, but they will harden over the next couple hours to make him flight-capable. 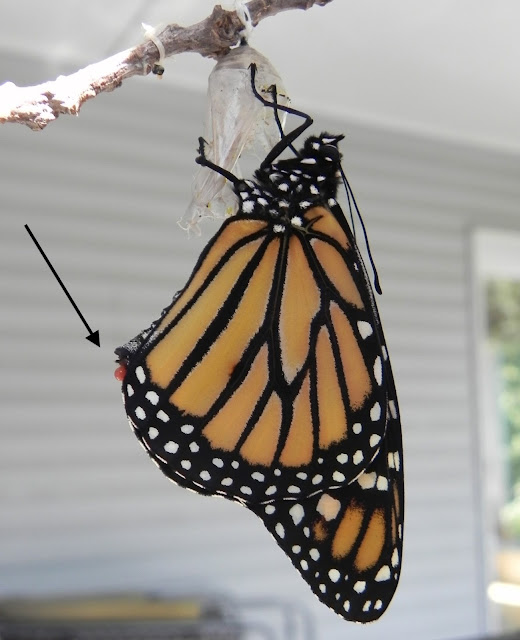 The last stage.  With the wings fully distended, the Monarch "dumps" his remaining meconium (the reddish-orange droplet at the tip of the arrow).  Just as an airplane pilot will jettison excess fuel in certain critical situations, the Monarch is getting rid of waste and excess weight.

The two black dots (androconia/scent scales) on the hind wings (see top photo) carry pheromones and identify this fellow as a male.  He flew away several hours later.