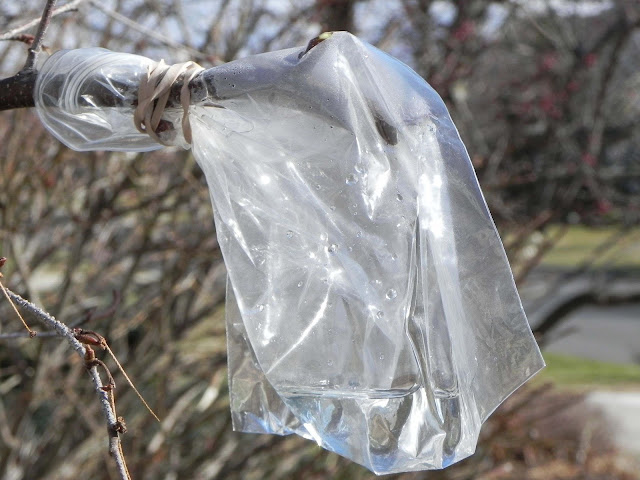 One of my first garden chores this spring [written in 2011] was to tidy up a flower bed near the front door.  Last year a birch tree cluster had begun to shadow the bed, so on Monday I pruned a few branches, then sat down to clear some of the detritus of dead material from the flowerbed.  Several minutes later, I noticed that a liquid was dripping down onto the area where I was working.  I looked up to see sap dripping from several of the pruned birch branches.

Several years ago I would have thought no more about it except to view the oozing as a fortuitous feast for any early-emerging Mourning Cloak butterflies.  But two years ago I wrote a post about the drinking of birch tree juice in Russia, and just last month posted a photo of a "sugar-sickle" (frozen dripping tree sap).

I couldn't pass up the opportunity. I used rubber bands to secure sandwich-sized Ziploc bags on the two clipped branches.  By the time I had finished gardening that afternoon, the bag (shown above) had accumulated quite a bit of liquid, and to my surprise it was beautifully clear: 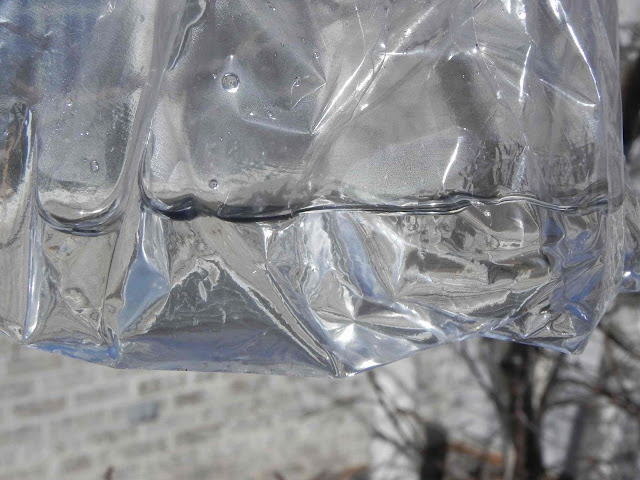 I suppose I had expected some coloration or cloudiness.  When I came out Tuesday morning, I was startled to find both bags substantially distended with birch sap.  It was now impossible to unwind the rubber band, so I brought out a scissors, intending to snip it, then decided it would make more sense to snip a small hole in the Ziploc bag to drain the fluid.  Placing a hole at the top of the bag allowed me 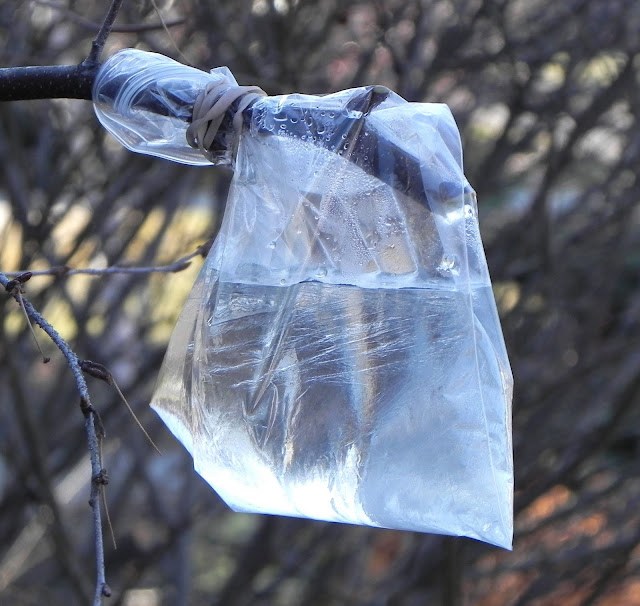 to tip the bag's contents into a container and then leave the bag on the branch to accumulate more fluid.

The next step, of course, was to search the internet for more information.  At Naturespeak I found directions for concentrating maple sap into syrup and into maple candy (a nice article, worth a visit by those interested).  The best source of information I found was at BirchBoy.com, with articles written by people in Alaska, where apparently birch juice processing is an honored pasttime:


Birch syrup is one of the few taste treats unique to Alaska and the circumpolar region. Although many people have never heard of it, birch syrup is not new. Birch trees, like many northern hardwoods, have long been tapped for their sugary, invigorating sap; but because of maple's high sugar content, generous sap flow, mellow flavor, and compliant nature, maple became the premier sugar tree in North America - except for Alaska, where birch trees are plentiful and maples are small and scarce. Birch syrup would have been the only springtime sugar source for Alaska sourdoughs in remote areas. For every gallon of birch syrup he made, the sourdough would have tapped no fewer than a hundred trees, collected more than one hundred gallons of sap, and burned nearly a cord of wood. Folklore relates that the syrup boiled down in open pans was tart, robust, and very dark, but the sourdough must have guarded and savored every drop. Neither did he have to worry much about spoilage, since pure, thick birch syrup seems incorruptible...

There is an outstanding amount of information at that link on the science of birch sap and the techniques for its harvest and for protecting the trees, and the subtleties of rendering it down to a syrupy consistency.

I haven't decided yet whether to undertake that aspect of the adventure.  Everything I've read suggests the process is time-consuming and needs to be undertaken with some degree of care to avoid scorching the concentrate.  I have about a half-liter of fluid now, because the trees are still dripping into this third day (memo to self: in the future don't prune when the sap is running).  That half-liter would be worth about 25 Euros in the Japanese market, so rather than waste it I decided to have some last night with my dinner.

I had a small glass of birch sap with my takeout Chinese food dinner last night.  It tastes pretty much like very fresh water, with maybe just a subtle hint of earthy overtones.  It goes well with General Tso's Chicken.

Reposted from 2011 because Modern Farmer has a report on how entrepreneurs are trying to commercialize "tree water" rather than rendering it into syrup:


A new wave of maple entrepreneurs are skipping the laborious syrup boiling process—where sap is reduced to 1/40th of its original volume to create the beloved pancake dressing—and marketing the pure watery sap as a health drink instead. The first maple water companies emerged over the last few years in Canada, but the idea has now infiltrated the American market. The drink is primarily found in health food stores in New England, but distribution is ramping up and this year’s maple water harvest should hit stores across the country in the coming months...

It’s always been common knowledge among maple syrup producers that taking a sip of sap was a good way to quench their thirst while working in the sugarbush, but apparently the notion that it could be a marketable substance is a new one. The first impression after downing a glass of maple water is that it tastes like water, but with a slightly sweet aftertaste and a tiny hint of earthy, maple syrup-like flavor.

With coco water (and other flavored waters) selling for $4 a pop, it’s a wonder that no one thought of bottling maple water sooner. It’s all-natural, sustainably-produced, vegan, gluten-free, non-GMO, paleo and local...

Between the U.S. and Canada, at least 11 different companies are marketing the drink so far. All of them are recent startups, sporting catchy names like Vertical Water, Wahta, Happy Tree and Sap on Tap.

Reposted August 2015 after reading an article in the Belfast Telegraph about water menus at luxury hotels.


The five-star Merchant Hotel has been home to the world's most expensive cocktail and now it has turned its attention to water by launching Ireland's first dedicated water menu. This summer will see the hotel will launch its new water menu with an exclusive range of 13 bottled waters.

The handpicked selection has been curated to include some of the world’s purest waters, with bottles originating from 10 countries including Italy, Iceland, Finland, the Faroe Islands and Fiji. Prices start from £4.95 and go right up to £26.45 per bottle with a description of the water and its mineral content guiding guests through the options available.

And to keep customers right - the Merchant has also appointed two new water butlers that can help guests choose the water that is right for their palate - by explaining the unique benefits, tastes and attributes of the different brands - many of which can be rarely found in the UK and Ireland.

More details at the link, but this item caught my eye:


De l’Aubier Maple Sap Water: Canada - £15.50 750ml Btl
This is the only water of its kind in the world. A still water of vegetal origin made from maple sap. Through the biological phenomenon of osmosis, it rises to the tree’s branches during the night and flows back to the roots during the day.  TDS 260mg - Sodium 2mg - Magnesium 2mg - Calcium 2mg.

Addendum:  The glass on the right shows what my birch water looked like after I boiled it down in a pan on the stove: 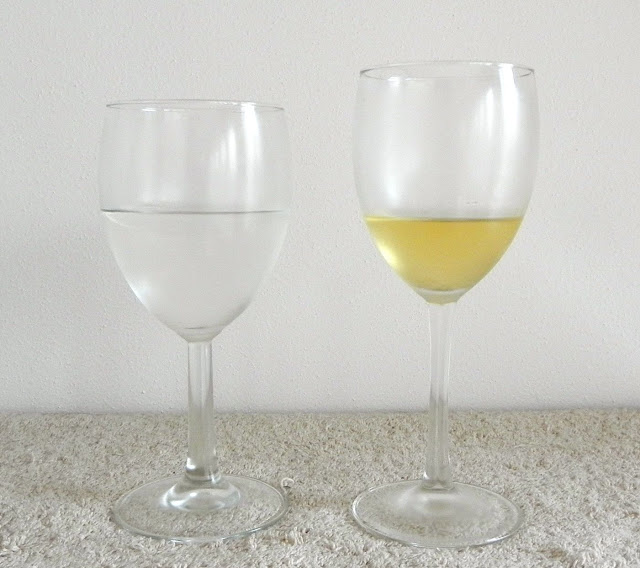 The process did concentrate and intensify the flavor, but frankly it wasn't worth it in terms of my time and the carbon footprint energy expenditure involved.

Addendum:  Found an article in DownEast about one man's effort to promote birch syrup -


So, eight years ago, he started what remains Maine’s only commercial birch-syrup operation. On average, 120 gallons of sap make just 1 gallon of syrup, three times the input needed for an equal amount of maple syrup. The result is complex — sweet, but also earthy and tart.

Reaffirms my previous impression that it's not worth expending the energy to boil down the sap.