Living with a port wine stain 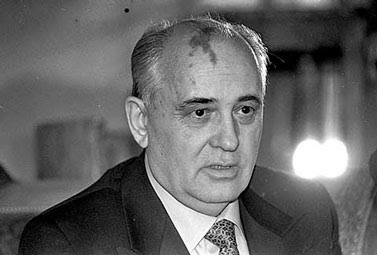 Mikhail Gorbachev, pictured above, is probably the most recognized public figure with a prominent port wine stain. These vascular birthmarks are not rare, but are seldom seen in film or on television because celebrities cover them with makeup.

For the non-celebrity average Joe, the question of whether to cover/treat a vascular birthmark depends on a constellation of factors including the size and location of the mark, the cost and convenience of masking or obliterating the mark, and some self-examination re the importance (or not) of trying to change one's appearance.

I'm blogging this topic today after running across an interesting article on birthmarks in today's Slate. The article links to a NYT story about a mother who took her child Terrance to the zoo. Another child encountered Terrance: “He said, ‘Look at your face. You look ugly,’ ” Ms. Carter said. “And Terrance would just say, ‘Hi.’ He was just happy to be at the zoo to look at the animals.”

The NYT article focuses on the idea that "every child has the right to look normal." The counterpoint offered by the Slate editorial is that when vascular birthmarks produce "social" problems rather than strictly medical ones, then the solution may lie in improving society's understanding and acceptance of such variety rather than by altering the appearance of the child (or adult). Or to rephrase the concept: every child has a right NOT to look "normal."

For those who have (or whose children or family members have) vascular birthmarks, a good starting point on the web is the Vascular Birthmarks Foundation. For support on the previously mentioned concept of accepting and living with a vascular birthmark, check out the website "Love Your Mark," which features photos and stories by people who by choice or necessity have come to tolerate or even embrace their birthmarks as "special" defining features rather than detriments.

Which brings us back to Mikhail Gorbachev. While researching this topic today I learned for the first time that Gorbachev opted NOT to have his birthmark covered or removed "as once he was publicly known to have the mark, he believed it would be perceived as him being more concerned with his appearance than other, more important issues." Furthermore, Rusnet in 2003 (credit for above image) reported that Gorbachev applied for a trademark not only on his name and "Gorby" nickname, but on the birthmark as well.

Finally I'll add some personal observations. I've carried a visible vascular birthmark for the last 60 years. The ignorance of children about such things should be understandable to anyone; when a little child asks me "what's on your neck" I explain it without embarassment or censure, just as one would educate a child who in a public place points to a person of color and infers that they didn't wash. What I find egregiously unacceptable is the attitude of certain subgroups of evangelical Christians who use a quote from Revelations and apply literal interpretation of the Bible to condemn people with birthmarks: "According to the Scriptures, the "mark of the beast" is received on the right hand or forehead." That accusation was made during Gorbachev's years in office, and was resurrected during the presidential campaign with questions as to whether Obama had a birthmark. That style of medieval thought process should have faded centuries ago, but unfortunately seems to persist.