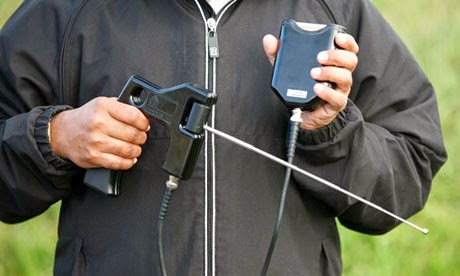 Last year The Guardian carried a story about a UK businessman who sold fake bomb detectors to the Iraqis:


A jury at the Old Bailey found Jim McCormick, 57, from near Taunton, Somerset, guilty on three counts of fraud over a scam that included the sale of £55m of devices based on a novelty golfball finder to Iraq. They were installed at checkpoints in Baghdad through which car bombs and suicide bombers passed, killing hundreds of civilians...

He claimed they could detect explosives at long range, deep underground, through lead-lined rooms and multiple buildings. In fact, the handheld devices were useless. Their antennae, which purported to detect explosives, and in other cases narcotics, were not connected to anything, they had no power source and one of the devices was simply the golfball finder with a different sticker on it...

A former colleague of McCormick told the BBC he saw him set up accounts in false names for 15 Iraqi officials. He said they "don't care if people live or die"; the only thing they care about is "how much am I going to get back – cashback"....

A prison sentence is in my view an inadequate punishment for a crime of this nature; something more medieval should have been considered.

It was with great disappointment, therefore, that I read in Harper's last month that the fake bomb detectors are still being used in Iraq:


Today, as our cab arrived at Kut, Iraqi soldiers at the checkpoint wore U.S. tricolor desert camouflage, the same my unit had been issued for the invasion. It was as if the hidden army of Saddam had reappeared wearing our uniforms. They walked carefully along our cab with a fake bomb detector, purchased from a crooked British contractor who resold $20 American novelty golf-ball locators for $27,000 each. Corrupt Iraqi officials bought $40 million worth of them. The soldier stared intently at the indicator light, three years after their sale had been banned, a keeper of the lie. “Everyone knows it does nothing,” the passenger in the front seat said.

What a totally screwed-up country.