Introducing "No Mow May" - updated 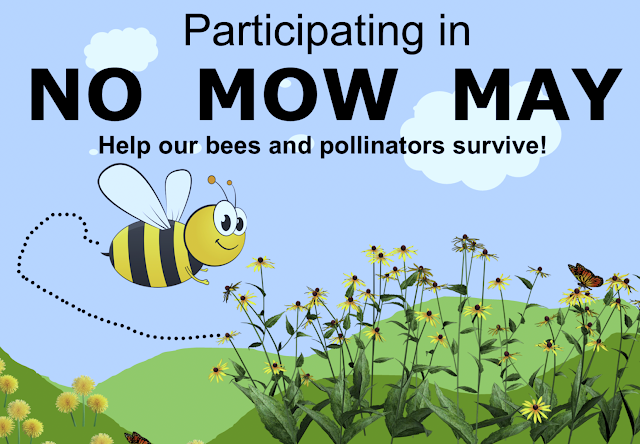 The "No Mow May" movement began in the U.K. in 2019.  I first encountered the concept in a New York Times article last month, reporting on a No Mow May program in Appleton Wisconsin last spring.

Appleton, some 200 miles north of Chicago, is a small college city nestled on the shores of the meandering Fox River. Two assistant professors at a local liberal arts college, Dr. Israel Del Toro and Dr. Relena Ribbons of Lawrence University, knew that No Mow May was popular in Britain. They wondered if the initiative might take root here, too.
They began working with the Appleton Common Council, and, in 2020, Appleton became the first city in the United States to adopt No Mow May, with 435 homes registering to take part...
Dr. Del Toro and Dr. Ribbons studied the impacts of No Mow May on Appleton’s bees. They found that No Mow May lawns had five times the number of bees and three times the bee species than did mown parks. Armed with this information, they asked other communities to participate.
By 2021, a dozen communities across Wisconsin had adopted No Mow May. It also spread to communities in Iowa, Minnesota, Illinois and Montana.
I learned about No Mow May in the fall of 2020 when I was looking to make my own yard more friendly to bees. The following spring, I helped organize No Mow May in Shorewood Hills, Wis., where I live. When I realized how quickly the movement was spreading, I started photographing it across Wisconsin...
Not everyone appreciated the unmown lawns. Allison Roberts, a resident of Prairie du Chien, Wis., participated in No Mow May even though her city hadn’t adopted it. After a few weeks, she awoke from a nap to find police officers pounding on her door.
“Apparently, they were here to ensure I was not dead,” she said.
Nor were her neighbors happy with her shaggy lawn. One of them, unable to stand the sight of it, eventually mowed it without her permission.

The concept was embraced by the Madison suburb of Verona last year.

"Such rules don’t mandate that you let your weeds and grass go shaggy in May, but municipalities simply won’t punish residents who choose to let their lawns go. By June 1, enforcement of lawn length generally resumes, and residents will be required to keep those lawns nice and tidy once again."

In England, a variety of rare plants popped up in some residents' yards:

People who chose not to mow were rewarded with rare plants. More than 250 wild plant species were recorded by gardeners last year, including wild strawberry, wild garlic and very rare plants including adder’s-tongue fern, meadow saxifrage, snakeshead fritillary and eyebright. Many orchids were also seen, including the declining ​man orchid, green-winged orchid, southern and northern marsh orchid and bee orchid.

The StarTribune reports the concept is widespread in Minnesota:

In addition to Edina, Monticello, Vadnais Heights and New Brighton are among the Minnesota cities participating in No Mow May for the first time. Those municipalities will not enforce city codes that restrict lawns from exceeding a maximum turf length (10 inches in Edina and Vadnais Heights, 8 inches in Monticello and New Brighton) during the month of May... ""The best part about it is it doesn't cost anything to do it and it makes such a big difference."

The Arboretum here at the University of Wisconsin in Madison notes that dandelions play a beneficial role in the health of lawn turf:

Dandelion (Taxaracum officinale) is native to Eurasia and naturalized throughout most of North America. The flowers are visited by many pollinators and are an important nectar source early in the season when few other flowers are blooming. Their deep taproots help to loosen and aerate soil as well as pull nutrients like calcium from deep in the soil, which makes the nutrients available to other plants once dandelion leaves decompose. Several bird species also eat dandelion flowers, buds, and seeds.

I found the two embedded lawn sign images online, and since they don't appear to be copyrighted, I took the liberty of printing them out.  Tomorrow I'll attach them to a lawn sign in our front yard to let our neighbors know why the grass is getting long.  And I'll try to update this post from time to time to show what the lawn looks like and how the local bee population is doing. 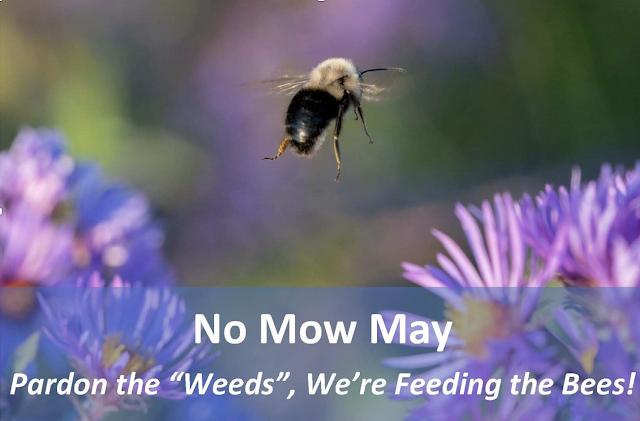 Addendum May 17:
We are now halfway through the no-mow month, so I thought I'd append a few pix to show how things are going.  Our south-facing front yard has clearly grown past the normal mow height, but doesn't look particularly shabby - The sign is out by the road to inform passers-by, but to the casual viewer, it looks like a lazy person's home.  There is one clump of post-blossom daffodil leaves (intentionally planted there years ago) and a smattering of dandelions, plus some smaller weeds that I'll inventory toward the end of the month.  One no-mow neighbor has a greater abundance of dandelions - 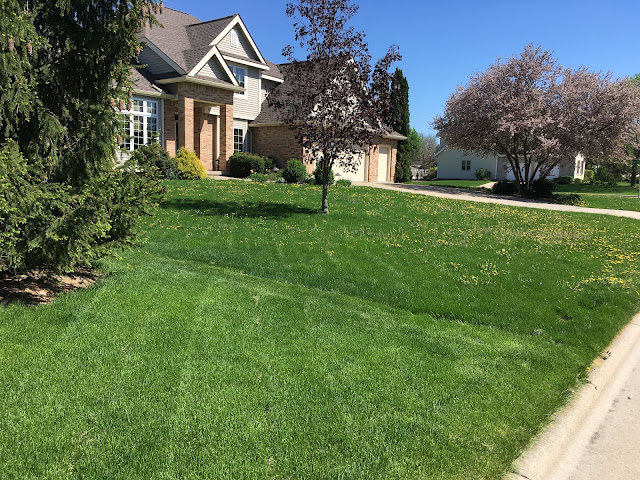 - and on another unmown lawn the dandelions are almost confluent:
One difference may be that in previous years I have routinely added a commercial "weed and feed" application once or twice a year to eliminate broad-leaf plants like creeping charlie.  The flora is a bit different in the north-facing semishaded back lawn, where violets are appearing - 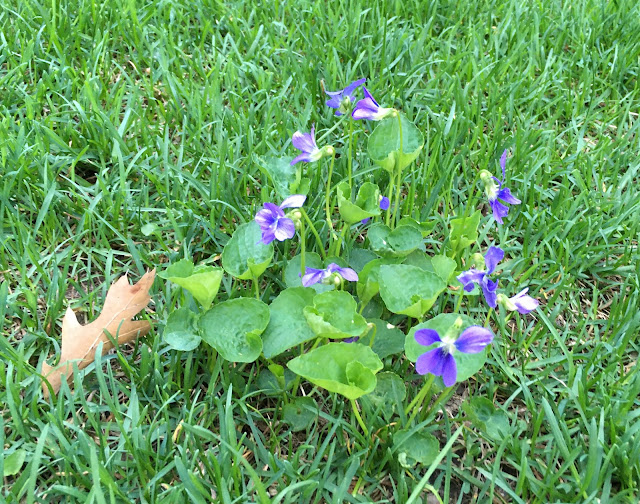 - along with ajuga and creeping charlie.   More info in a week or two.