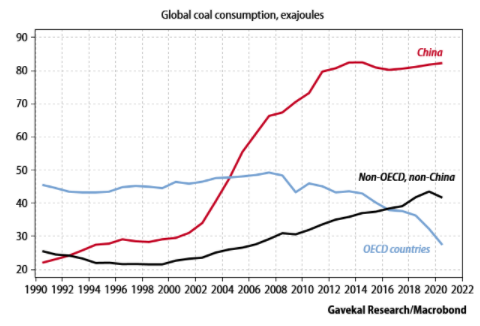 "The two decades of China’s WTO membership have seen the country enjoy economic growth that has been mostly coal-powered. For many reasons, coal is a cheap way to produce energy. Meanwhile, the rest of the world has been trying to shift to other forms of energy, which tend to be more expensive.

China now has an appalling pollution problem, and probably wants to stop burning so much coal. Its recent energy crisis is a sign of attempts to shift away from coal reliance. That leads to an uncomfortable conclusion: either China keeps polluting itself (and the rest of the world), or it doesn’t and other emerging countries do so instead. Or, none of them keep burning coal. In all these scenarios, that thereby increases the prices of the goods China sells to everyone else.

You could argue that this is a price worth paying in the battle against climate change. And the levels of pollution in China’s big cities are horrifying; the leadership would be remiss if if didn’t try to do something. But the bottom line is that the rest of the world needs to get used to monitoring China as a potential source of inflation, not deflation."

Text and image excerpted from Points of Return by John Authers in his Bloomberg newsletter.