How much snow can the roof of your home tolerate? 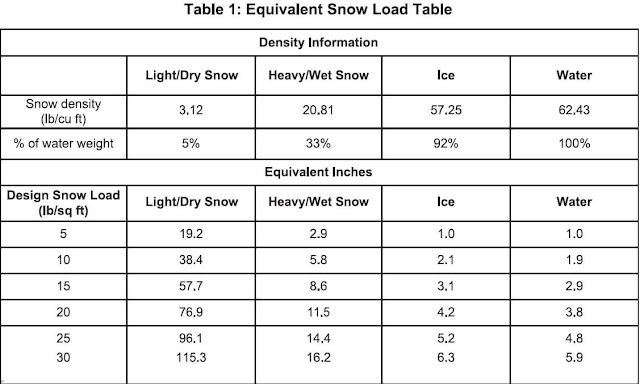 This extraordinary winter has created much anxiety among homeowners worried about whether their roof can withstand the weight of the snow.  When should you worry?  I had to look it up, and found the answer in Reuben Saltzman's excellent Home Inspector column at the StarTribune (I highly recommend that homeowners bookmark and browse his home inspection blog).

For southern Minnesota, the building code stipulates load-bearing of snow by the roof of 35 pounds per square foot.  But... as anyone who has ever shoveled snow understands, there is a world of difference between light fluffy snow that falls when temps are near zero and the heavy wet snow that falls when the temps are closer to freezing.  The table embedded above sorts this out,

Water weighs 62 pounds/cubic foot, ice just a little less.  Heavy and light snow are shown in the first two columns (from 1/3 the weight of water to 1/20th); this is obviously a continuum, but the two numbers shown are useful to make the point.

The bottom part of the chart translates the numbers into snow depth.  If a roof was built to withstand 20 pounds per square foot, it would be at risk with a foot of heavy wet snow, but can handle over 6 feet of light dry snow.

It gets more complicated, because as snow remains on a roof, it becomes progressively more compact, and note that the tolerance for ice is way less than for snow.

In point of fact, residential roofs rarely collapse from snow.  But here in Wisconsin this week there have been reports of barn roofs and outbuilding roofs on farms collapsing, because building standards for those structures are less rigorous.

And a bigger problem than roof collapse is water penetration from ice dams.