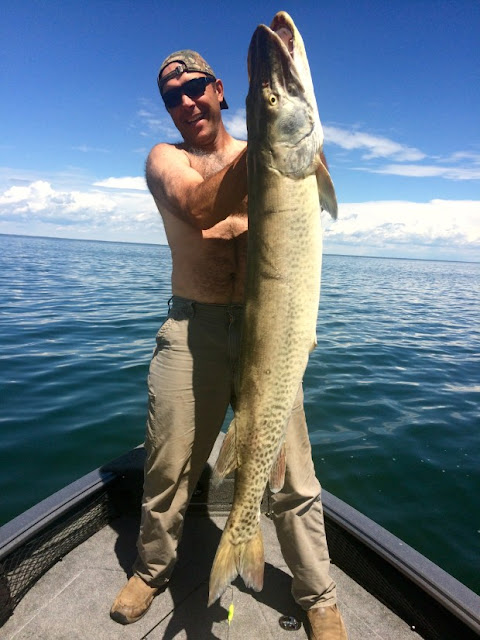 
A 59 1/2-inch muskie — a rare specimen that likely would have set a state record had it been caught alive... The current Minnesota record for a catch-and-release muskie is 56 7/8 inches, a fish caught by Andrew Slette of Hawley on Pelican Lake in Otter Tail County in June 2016...

Today, a catch-and-release ethic pervades muskie angling, especially in Minnesota. Muskie anglers successfully lobbied lawmakers in 2014 to increase the minimum length for keeping a fish to 54 inches. As such, many anglers believe Lyons’ record has been “broken” numerous times, but the fish were released and never weighed. It’s conceivable that a record-breaking fish could be caught but that it would be illegal to keep it...

Scientifically speaking, length is probably a more valuable measure than weight, since an individual fish’s weight varies throughout a single season as it produces eggs (all monster muskies are females), suffers through stressful periods and gorges itself in the fall on fatty prey. But it doesn’t shrink in length. While growth slows tremendously for muskies as they reach old age, they aren’t believed to actually stop growing...

Gilbert said he had no reason to keep the fish. “After I held it up for a photo, I just dropped it back in,” he said. “I figured that was the way to show some respect for the fish. It still smelled up my boat for two weeks.”

Based on a clipped fin, this one was estimated to be 25 years old.

Posted for fellow Minnesotans and others who have spent long hot summer afternoons trolling with a lure as big as the fish you usually catch...

Addendum: Here's another one: 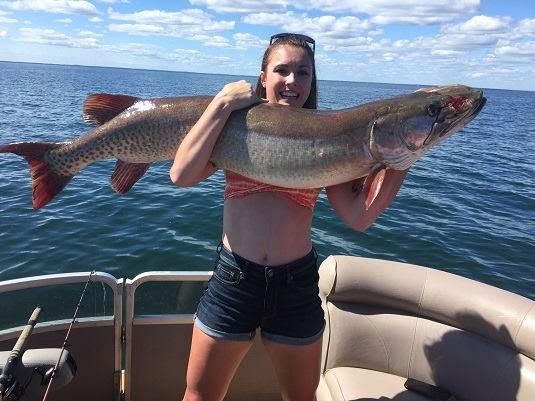 Caught with a 12-inch, black-and-gold crankbait lure.  Kudos to the couple for this:


“Our main concern was ‘Let’s get that fish back in the water,’ ” Derek Poshusta said. He estimates the fish was out of the water for less than a minute.

That's the proper attitude for a sportsman not fishing for an evening meal.

And finally a muskie chomping on a full-grown northern. (screencap from video): 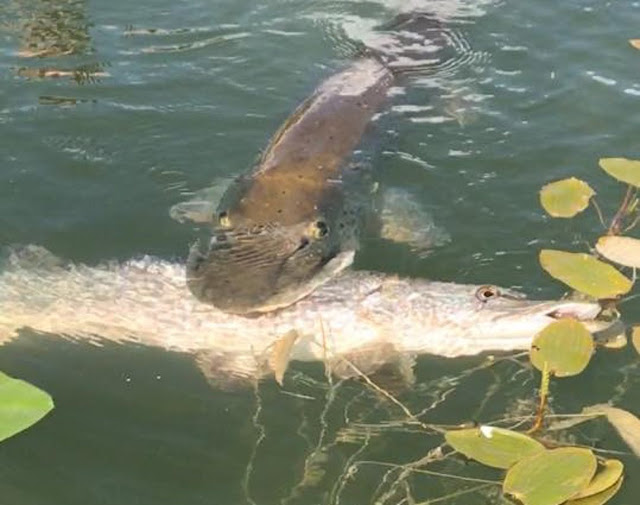 Reposted from 2017 to add this distressing report at Vice that gives new meaning to the old phrase "the muskies are biting today": 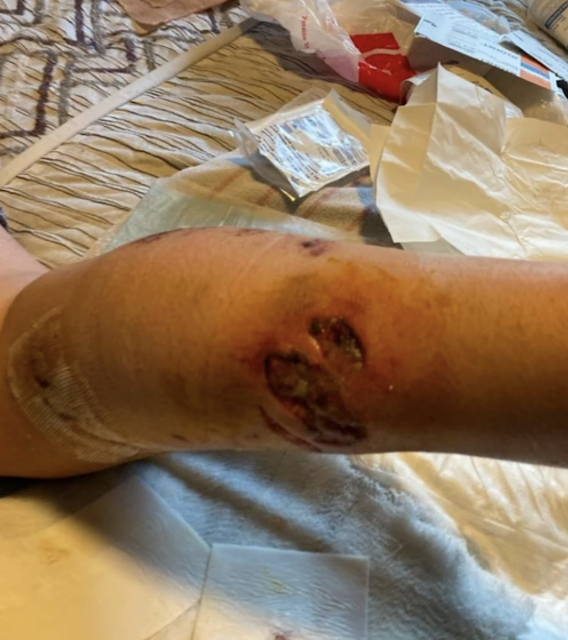 "Terry Driver and his wife Kim were relaxing with a group of friends on the beach at North Star Village along the Winnipeg River near Minaki, Ontario, about a three-hour drive east from Winnipeg, around 4 p.m. that day when Kim, standing in chest-deep water, let out a scream.

“All of a sudden she just said, ‘Someone’s got my leg,’ and then started screaming and her arms went up, and she went underwater and we all kind of stood there in complete disbelief and didn’t know what was going on,” Terry recalled.

It turned out the culprit was a muskellunge, or muskie, a fish that’s highly sought out because of its rarity and size...

Thankfully, the couple’s beach crew included nurses and Ontario Provincial Police officers, who administered first aid while they told Terry to get his truck and rush her to a hospital in Kenora. ..

“I looked down and I saw the fish’s head, which looked like an alligator, and it just grabbed it and it moved me from side to side and then it pulled me under,” she told Global. "