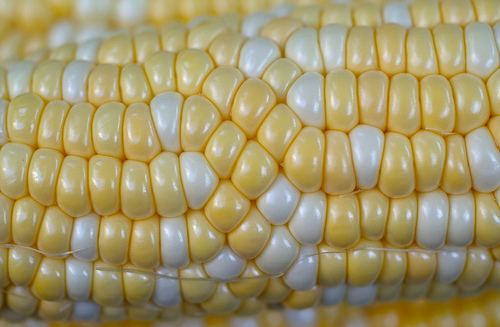 Kernels on a cob of corn, showing an interesting phyllotactic defect where regular columns of kernels suddenly make a checkerboard pattern and then revert to columns again.

Yesterday we got our first fresh sweet corn from the local farmers' market, and like the one illustrated above, it was the bicolor variety, which we favor.

As soon as corn is picked from the stalk, the natural sugars begin to convert to starch, so people who buy days-old corn from grocery store bins never learn how great it can taste. You should buy it from a farmer who has picked it that morning; even better is to pick it yourself in the field and run (don't walk) with it to the kitchen where you have the water already boiling or the microwave already preset.

In 1965 my second paid summer job (after a disastrous effort to sell woolen clothes door-to-door in July) was at the Green Giant packing plant in Le Sueur, Minnesota, where I lubricated the cookers and watched the line for dented cans coming out of the canning machine. We worked 12-hour shifts at minimum wage (and no work/no pay on rainy days if the trucks couldn't get into the field), but once a week they would bring a truckload of corn, dump it into garbage cans into which steam was fed, and provided tubs of butter...

Reposted from 2009 (!) to add some information about the above-mentioned summer job, because yesterday I found some stuff while sorting through old memorabilia.

My prior summer job had been an effort to sell woolen clothing door-to-door in June.  It was commission-only, and I had earned $5 the first week but had spent $5.50 parking my car downtown.  My dad was a traveling salesman, so I couldn't work for him.  My mother opined that when she was growing up (1920s), her older brothers worked seasonally for Green Giant, so she called the factory and scheduled an interview for me, then drove me down.

The personnel office apparently took one look at me and realized I was not going to do well on a field crew, but they offered me a job in the processing plant.  I had zero relevant skills, so they offered me an entry-level position in the room with the cooker machines, which I thought was better than nothing.

The processing plant (now demolished) was in the heart of the town, so mom drove me around and found a house with a "room for rent" sign within walking distance, at a reasonable price ($6 per week), with IIRC a hot plate provided in the room.  She told me she'd be back when the summer was over.

The plant ran two 12-hour shifts, so I rotated each week from one to the other.  But the length of the shift varied according to the availability of material (corn or peas) to be processed.  If rain precluded getting equipment into the field, you didn't work - and didn't get paid.  This was my work schedule for the month of July: 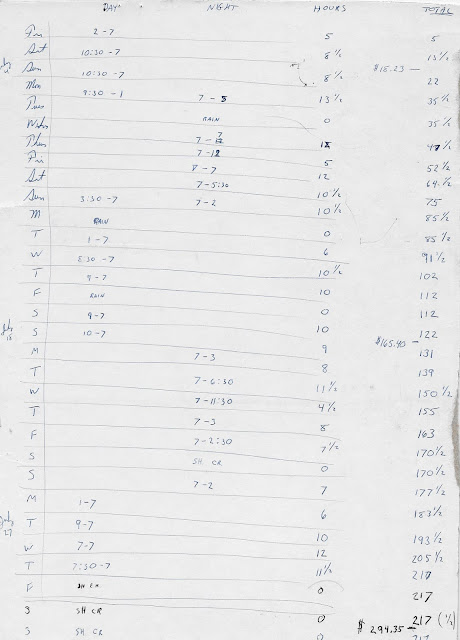 The work was not physically demanding, but it was mind-numbingly tedious.  I was paired with an elderly man, and we were responsible for the cooker machines - huge cylinders into which a conveyor belt brought a steady stream of filled cans, the contents of which got cooked as the can moved through the machine.

The first part of the job was to grease the equipment.  I learned how to fill a grease gun and where all the nipples were on all the cookers; that was simple but sweaty work in the summertime leaning over and reaching under hot steel.

The other part of the job was to watch the conveyor belt for defective cans.  Corn and peas arrived at the plant and went by conveyor to the upper floor where they were husked or shelled and distributed into cans.  The last step involved stamping a lid onto the can.  If something went wrong, the can (or a series of them) would wrinkle or crumple.  If one of those cans entered the cooking machine, it could jam.

So the old man and I spent 4-12 hours per day looking at the conveyor belt.  If a bent can appeared, you had to run across the plant floor and up a ladder and grab the can and throw it out onto the floor.  I was impressed by how agile this elderly (tho probably younger than I am now) man was in that regard.

But if there were no problems, you stared at that line of moving cans constantly.  I used that time to compose a Broadway musical in my head broadly based on the recently-popular "Oliver."  And the endless tedium was a not-really-necessary stimulus to me to apply myself in my college courses to seek a different career.

In the years that followed I occasionally looked back at my pay stubs from that summer job ($583 for two months = $1.36 per hour) as a pittance, but yesterday I punched the numbers into an inflation calculator: $1.36 per hour in 1965 was equivalent to $11.13 per hour in 2020.  So... not inappropriate for an entry-level nonskilled job.

Curiously, 50 years later I was at a neighborhood party here in Madison and met a neighbor who told me that she had also worked at the LeSueur Green Giant plant in the summer.  Readers with equivalent experiences are welcome to offer comments.