In 1965 this dress shocked a nation 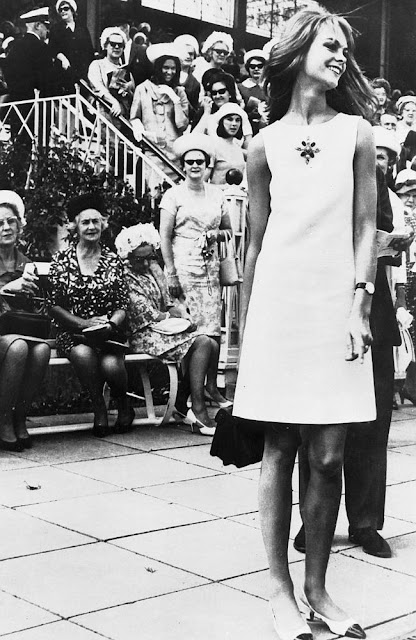 Jean Shrimpton wore this white shift dress to Derby Day in Melbourne in 1965.


In 1965, textile manufacturer DuPont de Nemours International engaged Jean Shrimpton, then the world's highest-paid model, to travel to Australia to be a judge in the 1965 "Fashions on the Field". Her fee for the two-week visit was £2,000, an enormous sum, equivalent to at least a year's wages for the average Australian man. Even The Beatles had been paid only £1,500 for their tour of Australia in 1964.

It has been said that Shrimpton, more than any other model of the 1960s, can lay claim to having been the world's first supermodel... It was expected that when attending Derby Day, she would be wearing a beautiful hat and accessories, including gloves and stockings, which were de rigueur for the ultra-conservative Melbourne establishment.

The garment Shrimpton and Rolfe developed for Derby Day was a simple white shift dress. However, DuPont had not supplied enough fabric to complete the intended design, so at Shrimpton's suggestion, Rolfe improvised, by finishing the hemline a daring 4 in (10 cm) above the knee. Shrimpton later claimed to have told Rolfe that "nobody's going to take any notice…" She also later told The Australian Women's Weekly magazine "I always wear my day dresses above the knee."

Her skimpy outfit contrasted starkly with the conservative attire of the other racegoers, and she was openly scorned by them, particularly as she was defying protocol by wearing no hat, stockings or gloves. As well as being the target of catcalls from men and jeers from women, she was surrounded by kneeling cameramen, all shooting upwards to make the dress look even shorter.

Conservative Australia was shocked. Former Lady Mayoress of Melbourne, Lady Nathan, accused Shrimpton of being "a child," and even prominent Australian model and columnist Maggie Tabberer was critical. Radio stations and newspapers published editorials for and against the outfit, and Shrimpton defended it. "I don't see what was wrong with the way I looked. I wouldn't have dressed differently for a race meeting anywhere in the world", she was reported as saying at the time.

The controversy quickly spread to Britain, where the press angrily defended Shrimpton.  According to the Australian analysis, Shrimpton's Derby Day appearance was the moment when a global youth culture began to shape young Australians' sense of style.  A reviewer of that analysis has claimed that all the young girls wanted to be like "the Shrimp": free, cool, and elegant."