And now that will be clarified on the label.  From ABC News: 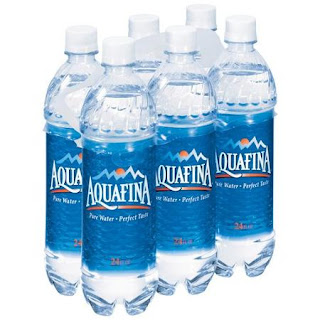 The label on Aquafina water bottles will soon be changed to spell out that the drink comes from the same source as tap water, the brand's owner PepsiCo said Friday.

A group called Corporate Accountability International has been pressuring bottled water sellers to curb what it calls misleading marketing practices.

Aquafina is the single biggest bottled water brand, and its bottles are now labeled "P.W.S." The new labels will spell out "public water source."

See - there was nothing deceptive there.  Doesn't everybody know that "P.W.S." stands for "public water source"?

Aquafina is a brand of purified bottled water products produced by PepsiCo, consisting of both unflavored and flavored water... It was first distributed in Wichita, Kansas in 1994, before becoming more widely sold across the United States, Spain, Canada, Lebanon, Turkey, the GCC countries, Iran, Egypt, Vietnam, Pakistan and India to compete with The Coca-Cola Company's Dasani and Dr. Pepper Snapple's Deja Blue. As of 2009, Aquafina represented 13.4 percent of domestic bottled water sales in the United States, making it the number 1 bottled water brand as measured by retail sales.