Pioneer life in the Boundary Waters

Several brief excerpts from Woman of the Boundary Waters, an autobiography by Justine Kerfoot, who moved to the Gunflint Trail in 1928 with her family and lived there for 50 years, setting up the famous Gunflint Lodge: 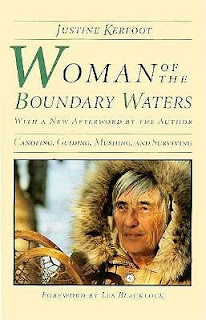 Invariably our loose dogs encountered porcupines, which always presented a challenge to them... The only effective method I found to remove quills was stringing the dog's hindquarters to the rafters, but low enough so the shoulders were on the floor, placing a stick through the dog's mouth for it to clamp down on and pulling out the quills one by one with pliers.  If the dog's hindquarters weren't lifted off the floor, there was no way of holding him steady."(p.38)

"The [telephone] line was as frail as a gossamer thread.  It became customary when traveling up and
down the Trail to watch for fallen trees on the line and stop to chop them or push them off.  We caried spare wire, pliers and an axe in our car at all times...

The first resorter to come along always patched a break.  To pull the wire ends together we hooked one end of the wire to the bumper of our car and drove ahead to stretch that side taut.  Then we would drag the other end by hand as close  as we could to the attached end and fill the remaining gap with a wire splice.  Later we would return with come-a-longs, sleeves, crimpers and a ladder to replace the makeshift patch and retie the line to the insulators... (p. 94)

Our 50-mile single circuit telephone line became efficient when everything was frozen during the winter months.  Once when Mother and I were coming back from town we found a break.  We had no wire along, so we filled the gap with an old tire chain.  The chain transmitted messages, both local and long distance for several weeks until we repaired the break. (p.97)