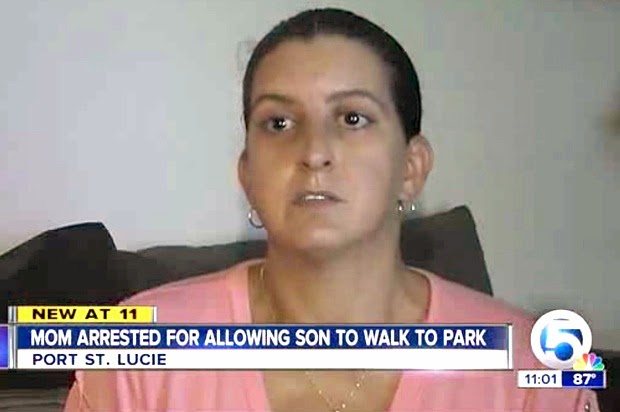 The Port St. Lucie, Florida, mom was arrested on Saturday for letting her 7-year-old son, Dominic, walk alone — in the daytime, with a cellphone — a half-mile to a local park. “I honestly didn’t think I was doing anything wrong,” she says. “I was letting him go play.”During his approximately 10-minute walk, the boy passed by a public pool, where a patron asked him where his mother was and other questions. As he told a local news station, “I got scared and ran off to the park, and that’s when they called the cops.” Police picked up the boy at the park, brought him home and arrested his mother for felony child neglect. In their report, police noted that “numerous sex offenders reside in the vicinity.” Gainey says the cops “just kept going over that, you know, there’s pedophiles,” which sounds to me like the kind of problem that perhaps there’s a better approach to than whisking kids off playgrounds and arresting mothers...

More at Salon, and an extended discussion thread at Reddit.

There is a Wikipedia page on slow parenting/free range parenting.  Years ago I wrote a post (which I frustratingly cannot locate this morning) which incorporated a map showing the range a man's father had wandered freely as a child compared to the range he wandered as a child compared to the neighborhood his child is allowed to wander.  The circles get smaller and smaller...

Addendum:  A tip of the blogging hat to reader Dan for finding the link I referred to above, which contained this image: 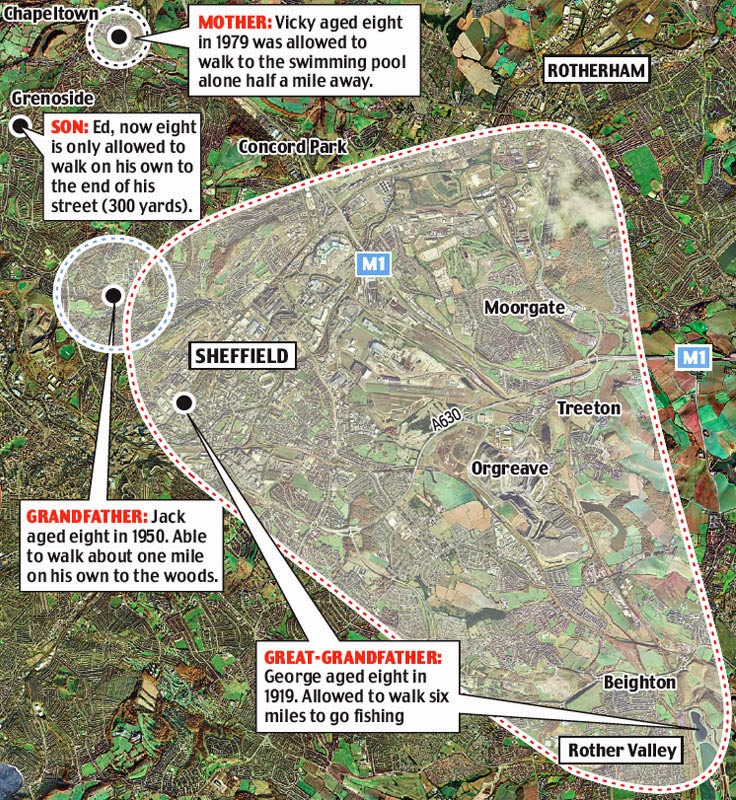 Addendum #3:  It has happened again, to another family.


It was a one-mile walk home from a Silver Spring park on Georgia Avenue on a Saturday afternoon. But what the parents saw as a moment of independence for their 10-year-old son and 6-year-old daughter, they say authorities viewed much differently.

Danielle and Alexander Meitiv say they are being investigated for neglect for the Dec. 20 trek — in a case they say reflects a clash of ideas about how safe the world is and whether parents are free to make their own choices about raising their children...

The Meitivs say they believe in “free-range” parenting, a movement that has been a counterpoint to the hyper-vigilance of “helicopter” parenting, with the idea that children learn self-reliance by being allowed to progressively test limits, make choices and venture out in the world...

Police picked up the children near the Discovery building, the family said, after someone reported seeing them...

Danielle is a climate-science consultant, and Alexander is a physicist at the National Institutes of Health. Alexander said he had a tense time with police on Dec. 20 when officers returned his children, asked for his identification and told him about the dangers of the world. The more lasting issue has been with Montgomery County Child Protective Services, he said, which showed up a couple of hours after the police left...

The Meitivs say that on Dec. 20, a CPS worker required Alexander to sign a safety plan pledging he would not leave his children unsupervised until the following Monday, when CPS would follow up. At first he refused, saying he needed to talk to a lawyer, his wife said, but changed his mind when he was told his children would be removed if he did not comply...

The family has a meeting set for next week at CPS offices in Rockville.
“I think what CPS considered neglect, we felt was an essential part of growing up and maturing,” Alexander said. “We feel we’re being bullied into a point of view about child-rearing that we strongly disagree with.”

I don't have time to cover it now, but I would note here that the April 2014 issue of The Atlantic has an excellent article by Hanna Rosin entitled "Hey! Parents, Leave Those Kids Alone."