Eels inside the cardiac chambers of a shark 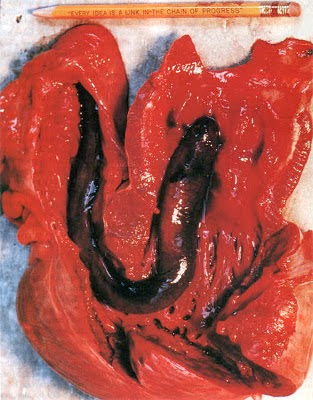 This image will be familiar to those of you who have encountered dog heartworm or other heartworms.  In this case it's the heart of a mako shark, and the "worm" is a type of eel:


These particular eels, called pugnose eels, Simenchelys parasitica, have been recorded before burrowing into the flesh of halibut and other large North Atlantic fishes (hence their species name), but never completely internal and certainly not in the lumen of the heart, so this was a truly remarkable find...

Their conclusion?  That this was a facultatively parasitic relationship.  In other words, the eels didn’t need to be living in the sharks heart (that would be obligate parasitism), rather they took advantage of an opportunity to get a meal.  They proposed that the eels probably attacked the shark after it had been hooked and was dangling, distressed, from the longline.  They had some evidence that the shark was probably resting on the bottom, which may have made it easier for the eels to find.  The pugnoses somehow gained entry (hypothesised to be through the gills) and made their way to the heart, where they dined on the beasts blood up until it died.  Maybe they would have burrowed out again after the animal expired, maybe they would have suffocated (remember – the eels had be swimming in and breathing the sharks blood once they were inside, how bizarre is that?).  We’ll never know because the carcass went in the fridge, which ended things for the eels, but also led to this amazing discovery.