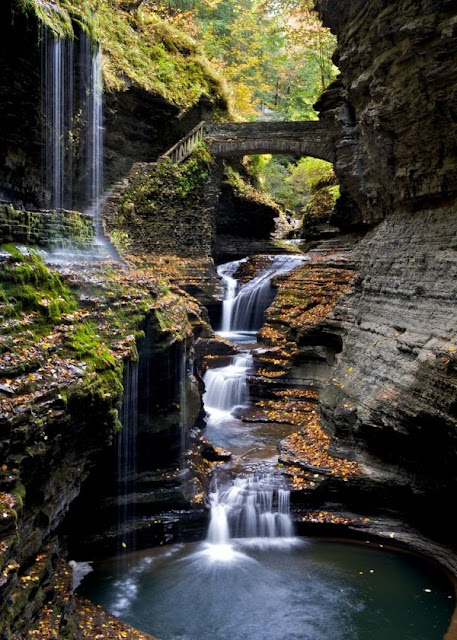 A quick search confirms that the stonework is a product of Civilian Conservation Corps workers.  A Google Image search of the topic yields thousands of photos of the park, but most of them emphasize the natural beauty of the gorge and the water.  I did find this image of stonework ("Jacob's Ladder") - 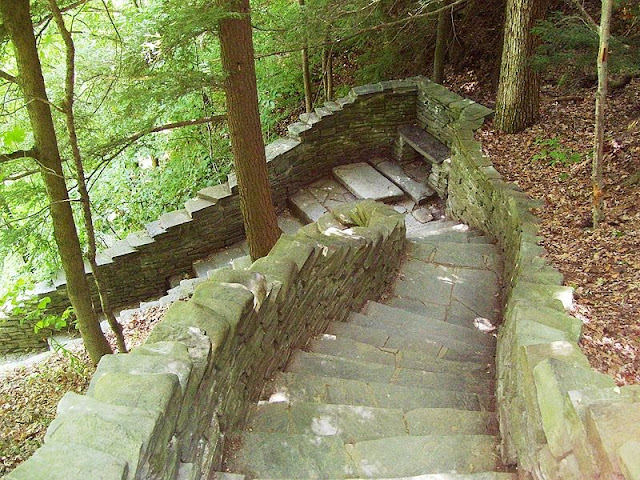 The Finger Lakes of New York state are a 12-hour drive from Madison, and my current situation does not permit an extended vacation.  If some reader of this blog lives within daytrip-range and would like to take a set of photos focusing on the stonework, I would love to add this park to TYWKIWDBI's CCC Stonework category, with you as credited photographer.

Addendum: I received replies from three readers, who inundated me with images of what obviously an extremely photogenic park.  From their submissions and photo albums I've reluctantly skipped over the pix of the natural beauty of the park and selected ones that focus on the Civilian Conservation Corps work (I've taken the editorial liberty of cropping for emphasis and to fit the blog and sometimes adjusting the color balance and exposure).

The bridges over the gorge(s) are a natural draw for the eye and the camera and structurally represent the peak of the CCC stonework.  This one over Rainbow Falls - 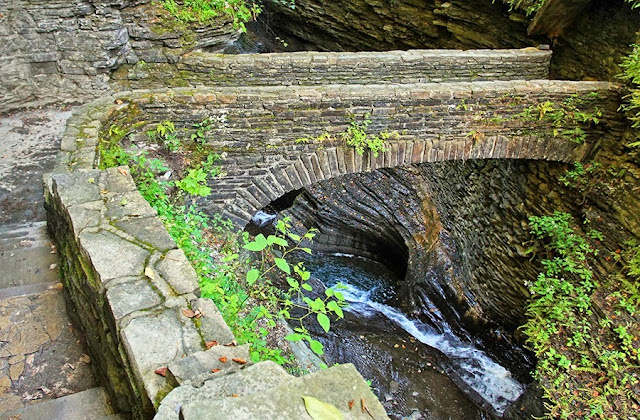 - by reader Christy shows how the use of native stone quarried near the park allows the creation of structures that blend almost seamlessly with the natural setting.  Here's another, virtually "natural" bridge - 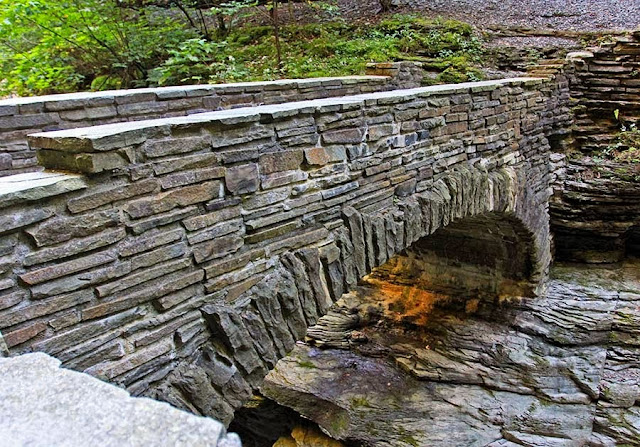 - at Central Cascade.  And finally, at Sentry Bridge reader Flask captured a view from underneath - 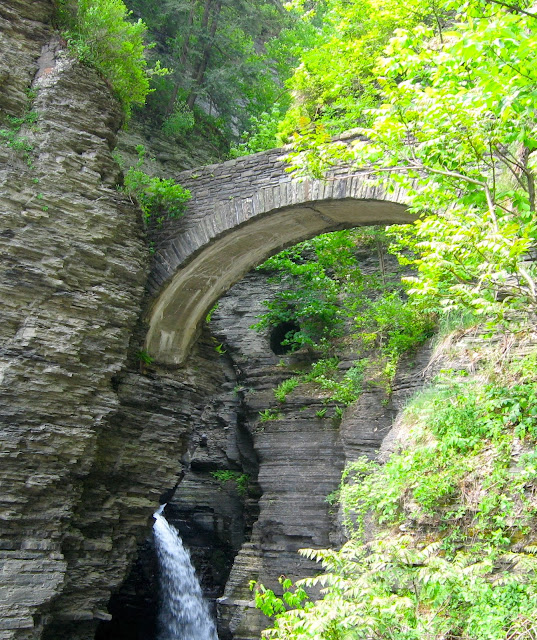 - that reveals a structural component I can't quite explain - an expanse of what appears to be concrete on the undersurface.  Concrete is certainly used on the top of the bridge (photo by Christy) - 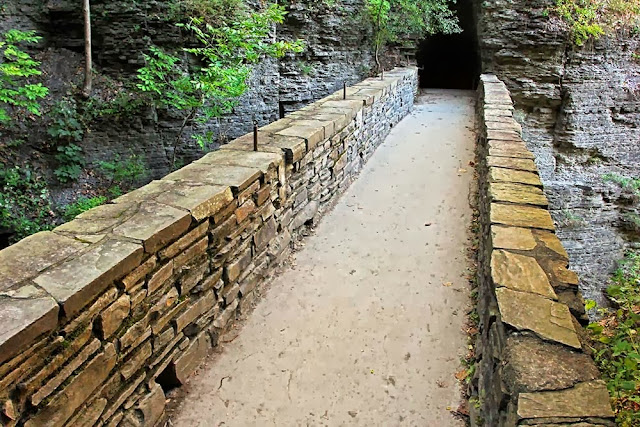 - presumably serving as a kind of "capstone" to keep water out during freeze-thaw cycles.  Whether that undersurface plays an essential role in weight-bearing is not clear to me.  Perhaps some readers here are engineers...

In the photo above one can see one or two gaps at the base of the walls, documented by reader Rachel - 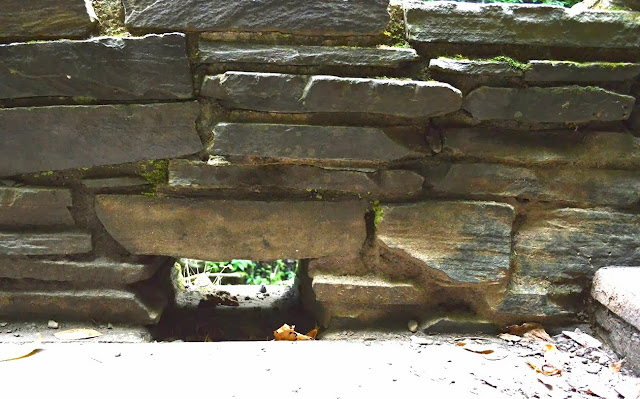 - as a planned drainage hole.  I've seen similar gaps in stone railings and parapets in Minnesota and suspect that in addition to water control they also serve (intentionally or not) as escapements for snakes and small mammals.

Now stairways.  Lots of stairways in this park - beautifully constructed, as this image by Rachel shows (many of the photos in this post will supersize with a click):


What I like about her image is how the stairway on the right is balanced by the sheer stone on the other side of the gorge, giving the man-made structure a very "organic" appearance.  Her closeup view of the steps - 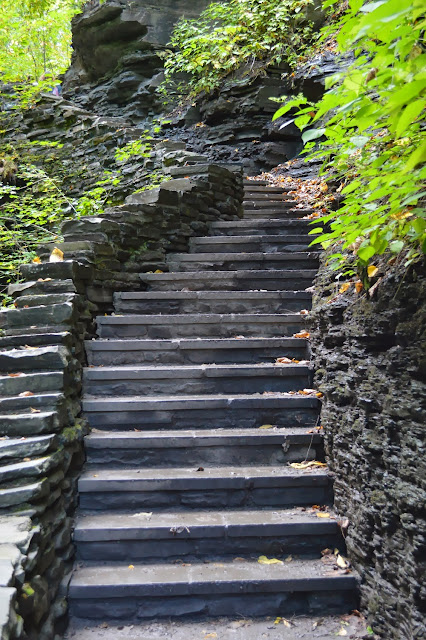 - shows that smooth slabs have been utilized for the ease of pedestrian traffic.  Interestingly, these are not artificial concrete slabs; Rachel arrived at Watkins Glen at a time when repair work was underway.  She found a set of slabs ready to be installed: 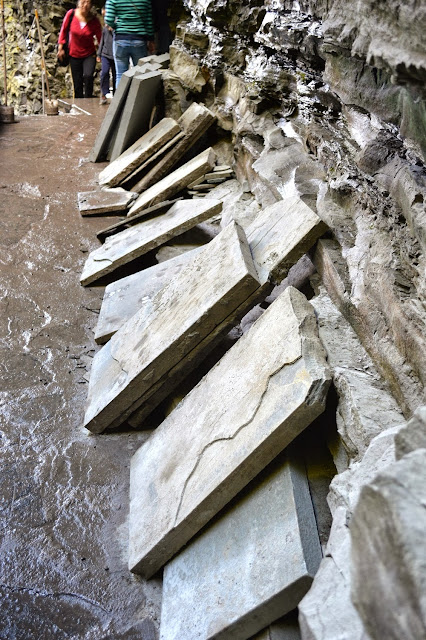 It appears to be a natural sedimentary rock (slate?), presumably harvested nearby.  These have been machine-cut on several sides to facilitate uniformity and installation, presumably a luxury the CCC crews of the 1930s would not have had.  Reader Christy documented the change when she encountered a repaired wall: 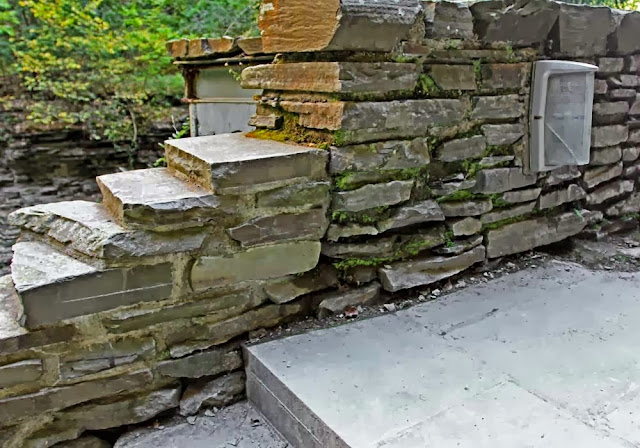 The smoothed edges of the stones at the far left are just a bit different from the hand-hacked ends of the presumably original CCC work on the right side of the photo.  Here's another photo by Christy of an original CCC wall: 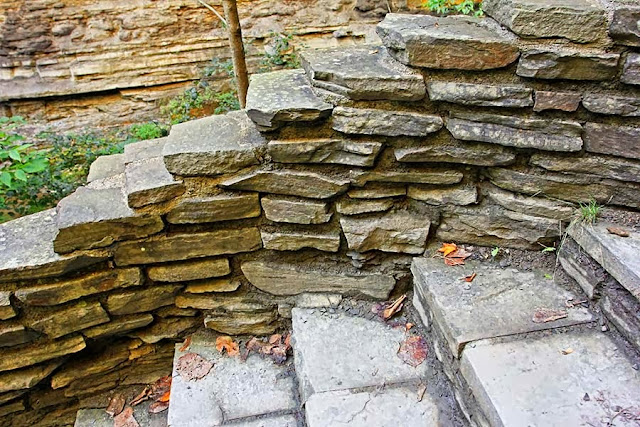 The edges of the stones have been chiseled and hacked to approximately square them off, but they are certainly not smooth like their modern counterparts.  (Notice also how the capstones on this descending wall have been overlapped to minimize entry of water into the structure - nicely done).

One additional photo by Rachel is for me very instructive: 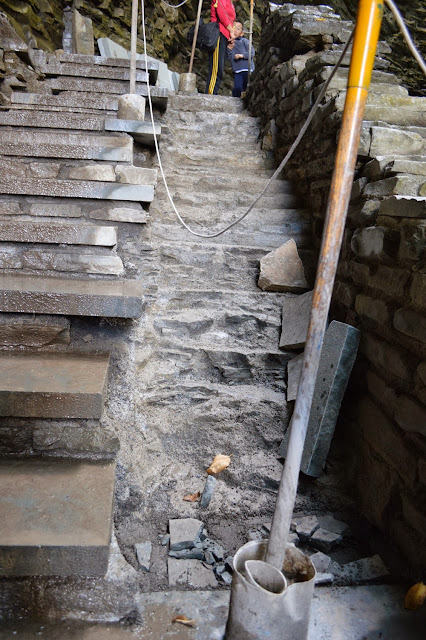 Here she captured an interruption in the modern restoration work, revealing how underneath the stairway is a slanting wall of native rock into which "protosteps" have been chiseled to help postion and bear some weight of the added steps.  Those boys in the CCC sweated mightily to get this kind of work done.

Now I think it's time for me to shut up and just let you enjoy the magnificence of the stairways, benches, retaining walls, and other CCC stonework at Watkins Glen.  First, three more photos by Flask, of the exit from a tunnel -


of a high and curving stairwell - 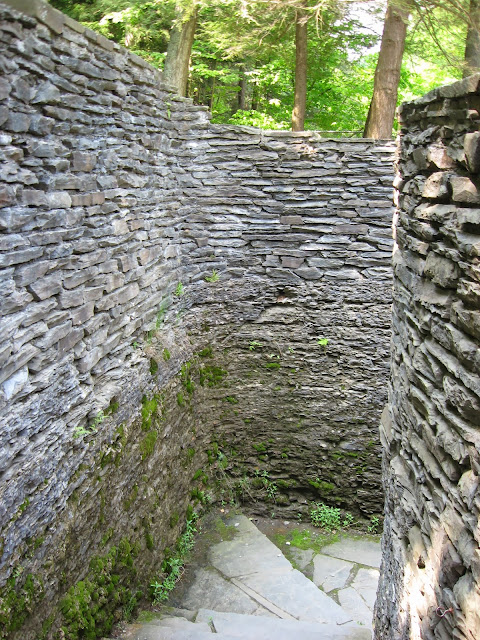 and of stone picnic tables in the park: 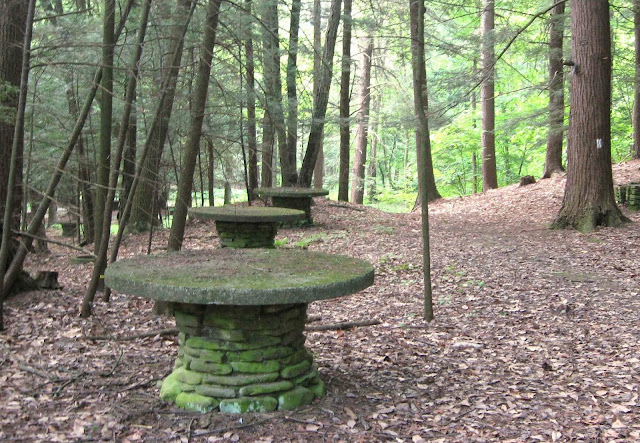 Now four more photos by reader Christy, showing a CCC wall (below Spiral Gorge) that has accumulated a menangerie of several types of lichen over the years - 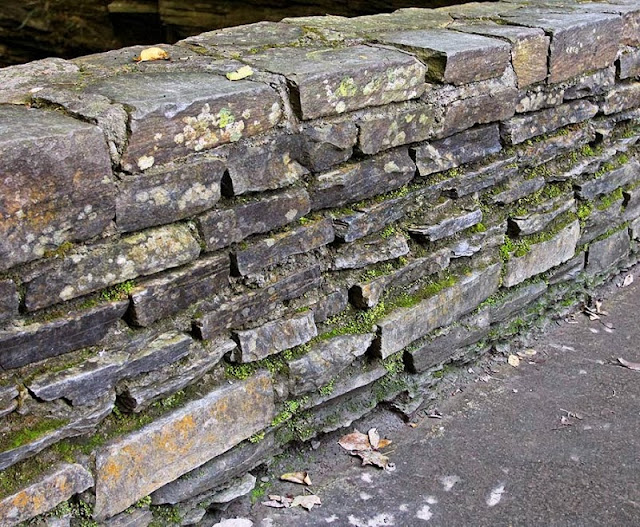 
And this smorgasbord of structures (retaining walls, bench, stairs, parapets) near the Cliff Path:


And this awesome overlook below Minnehaha Falls: 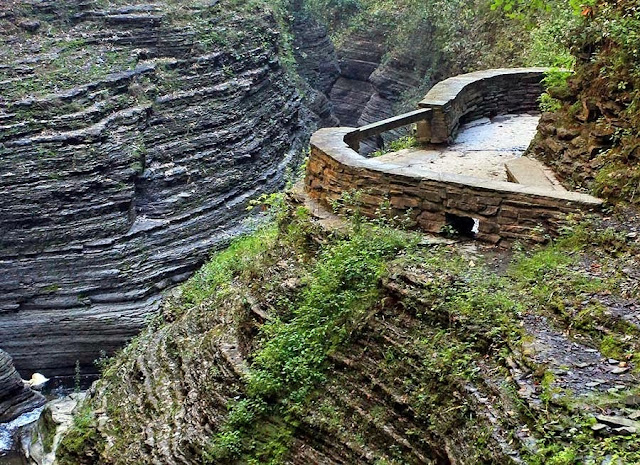 When I saw the photo above, I was reminded of a comment Christy offered in her email to me: "I love how organic it appears to be, as if the glen itself grew the walls, bridges and stairs."  I quite agree.  Obviously the boys in the CCC work crews and their stonemason supervisors were blessed to have an abundance of appropriately-shaped sedimentary rock, and a natural setting in this water-carved gorge that is inherently awesome, but the way the stonework is incorporated into the natural setting is amazing.  For illustration, I offer these final two photos, first one by Christy showing the man-made wall merging into the natural one: 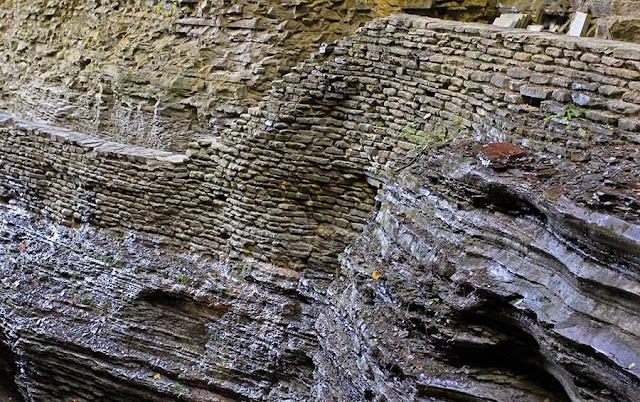 And then this one by Flask, up close to a curving stairway wall: 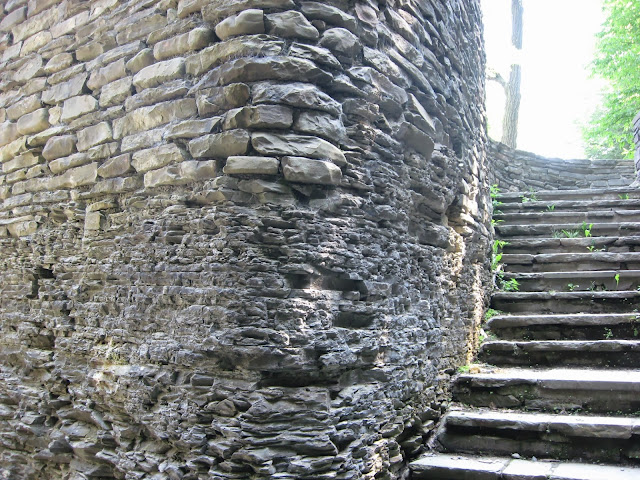 Where does nature's work end and man's begins?

Watkins Glen and other state parks were created for your enjoyment.  Use them.

A final hat tip to the photographers - Rachel (who has additional photos at her Nutrition Adventures blog), Christy (who has dozens more Watkins Glen pix in her Picasa Web Album, and Flask (of furthermore, flask) - without whose work this mega-post would not have been possible.