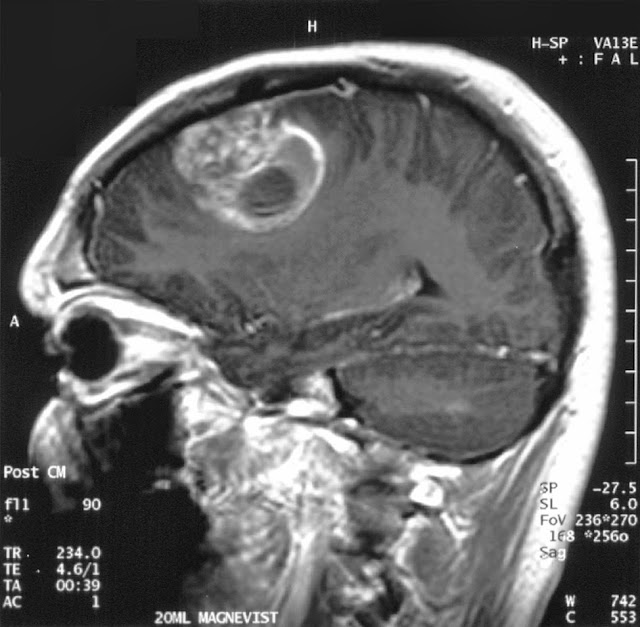 This MRI depicts a sagittal view of the head of a 15-year-old boy with GBM.

My wife forwarded to me an article in the Washington Post that is absolutely fascinating.
Glioblastoma multiforme is a particularly vicious type of brain cancer.  It arises from neural tissue and is extremely aggressive, infiltrating in a fashion that makes surgical excision virtually impossible, and is resistant to radiation therapy and chemotherapy (because drugs have difficulty penetrating the blood/brain barrier).

Enter the poliovirus, which has evolved over millenia to target neural tissue:


The Preston Robert Tisch Brain Cancer Center at Duke University has the largest experience on the East Coast with my sort of tumor, so I went there for further consultation and treatment.

As doctors there examined me, it was obvious that my tumor had already grown again; in fact, it had quadrupled in size since my initial chemo and radiation. I was offered several treatments and experimental protocols, one of which involved implanting a modified polio virus into my brain. (This had been very successful in treating GBMs in mice.) Duke researchers had been working on this for 10 years and had just received permission from the FDA to treat 10 patients, but for only one a month. (A Duke press release last May explained that the treatment was designed to capitalize “on the discovery that cancer cells have an abundance of receptors that work like magnets in drawing the poliovirus, which then infects and kills the cells. The investigational therapy . . . uses an engineered form of the virus that is lethal to cancer cells, while harmless to normal cells. The therapy is infused directly into a patient’s tumor. The virus-based therapy also triggers the body’s immune system to attack the infected tumor cells.”)...

I returned to Duke a month after the infusion, and though an MRI showed some expected swelling, the more significant fact was that the tumor had stopped growing. I have gone back to Duke every two months since then, and the tumor, initially the size of a grape, is now a scar, the size of a small pea. It’s been two years since the initial biopsy and radiation, and one year since the experimental polio viral treatment, and I have no evidence of recurrence nor tumor regrowth.