A mechanical gear in an insect - updated 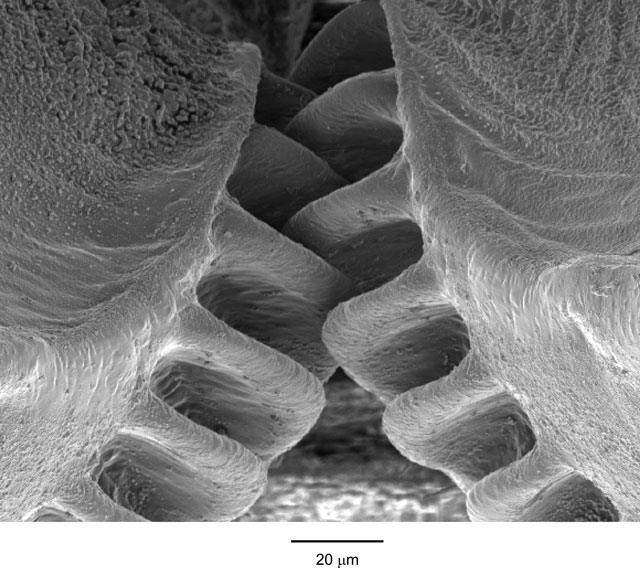 This miniature marvel is an adolescent issus, a kind of planthopper insect and one of the fastest accelerators in the animal kingdom. As a duo of researchers in the U.K. report today in the journal Science, the issus also the first living creature ever discovered to sport a functioning gear...

At the top of its legs, a minuscule pair of gears engage—their strange, shark-fin teeth interlocking cleanly like a zipper. And then, faster than you can blink, think, or see with the naked eye, the entire thing is gone. In 2 milliseconds it has bulleted skyward, accelerating at nearly 400 g's—a rate more than 20 times what a human body can withstand...

Another odd thing about this discovery is that although there are many jumping insects like the issus—including ones that are even faster and better jumpers—the issus is apparently the only one with natural gears. Most other bugs synchronize the quick jolt of their leaping legs through friction, using bumpy or grippy surfaces to press the top of their legs together, says Duke University biomechanics expert Steve Vogel, who was not involved in this study. Like gears, this ensures the legs move at the same rate, but without requiring a complicated interlocking mechanism. "There are a lot of friction pads around, and they accomplish pretty much of the same thing," he says. "So I wonder what extra capacity these gears confer. They're rather specialized, and there are lots of other jumpers that don't have them, so there must be some kind of advantage."

Further details (and a photo of the insect) at Popular Mechanics.

Updated with this video, via BoingBoing: