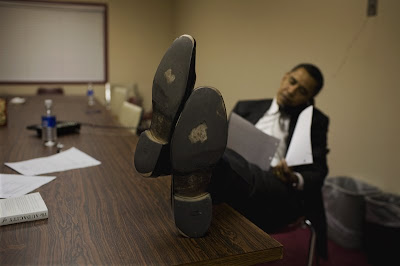 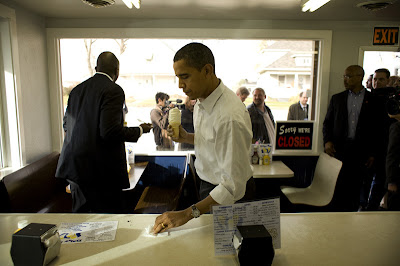 Senator Obama was doing press interviews by telephone in a holding room between events. Sometime later as he was getting ready to begin his event, he asked me if I was photographing his shoes. When I said yes, he told me that he had already had them resoled once since he entered the race a year earlier. Providence, R.I., 3/1/2008.

I loved that he cleaned up after himself before leaving an ice cream shop in Wapello, Iowa. He didn't have to. The event was over and the press had left. He is used to taking care of things himself and I think this is one of the qualities that makes Obama different from so many other political candidates I've encountered. Nov. 7, 2007.

Selections from several dozen images in a photoessay by a Time magazine staffer who has followed Obama since well before his bid for the presidency. Link found at J-Walk.